For Helena Tilley who is looking for more information regarding St Paul’s Church, Penn Road,
It was built in 1835, at a cost of about £7,000 given by the Rev. Wm, Dalton and his good wife presented the church with its organ.

Is this the photograph you posted previously of the demolition of that grand old building Helena?

On its demise in 1963-4, it was you could say, one of the first major casualties resulting from the building of Wolverhampton’s new ring-road.

It wasn’t burnt down though an act of vandalism. It was just its time had come it was the era of Church redundancies, and it was also obstructing the widening of the Penn Road and Underpass.
At the time of its demolition contractors wheren’t to much bothered then with reclamation so it was knock it down, burn the waste and get it done, and thats what we see here.
And I must add the sadness of this occasion is written on the face of the demolition worker, as he notices the way the two burning joists have took on the appearance of a symbolic cross; I wonder what was going through his mind?. 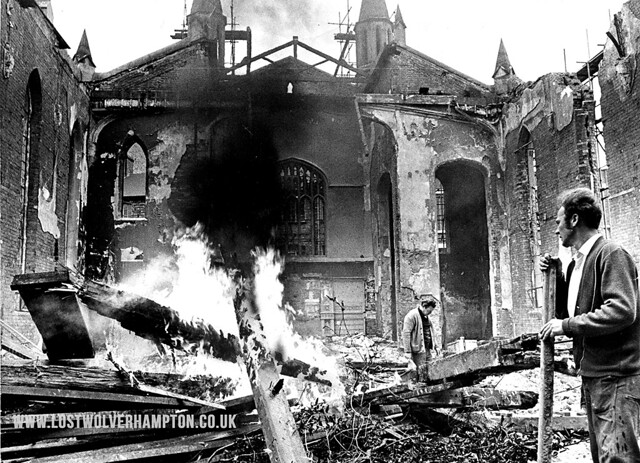