The full – Backs Alf Crook, Roy Pritchard, Laurie Kelly and Terry Springthorpe, pose with their Captain in front of the coach about to take the Wolves Cup winning side to the reception at the Town Hall – 1949 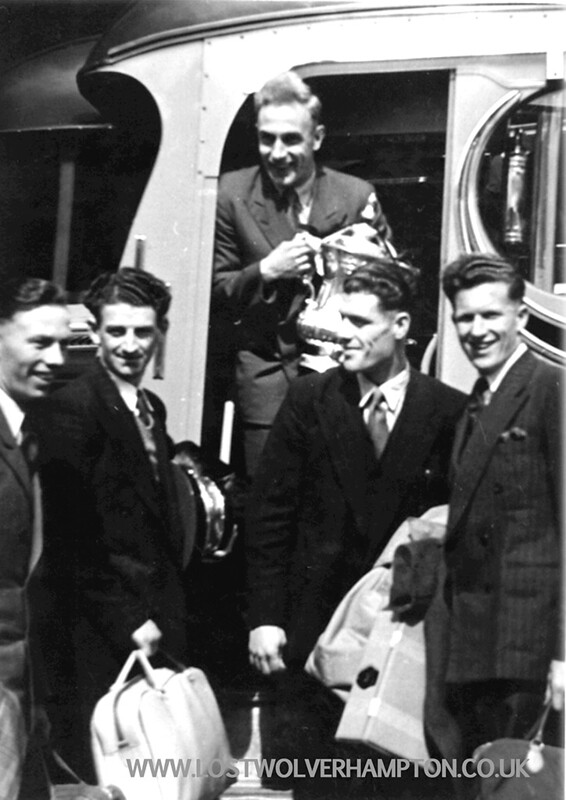 An excerpt from a slide show I do entitled Wolves Cup Run of 1949.

Up to this point in time Wolves had beaten Chesterfield 6-0 in the third round, on January 8th. and with further victories over Sheffield Utd, Liverpool and West Brom, they were now drawn against the Cup-holders Manchester Utd, in the Semi-final.

The odds were well against Wolves from the start, and as the game progressed their task seemed impossible. Jesse Pye, still suffering from a bout of flu was playing well below par. and Roy Pritchard our left back had to be substituted to the left wing, being injured after only six minutes,

Against the run of the play we scored, but they quickly equalised, then with the score one each, and half an hour to play, Laurie Kelly was so badly injured he had to be stretchered off . ( and remember no substitutions in those days).
But then much to everyone’s surprise a few minutes later, he hobbled back on to the field. and carried on, and although in great pain,
It was said, that evening in the local newspaper, “his extra effort gave Wolves, the strength to keep the United at bay throughout the ninety minutes and extra time, and earned them a well deserved replay.
The replay was to be at Evertons ground – Goodison Park. and It was obvious from the start Kelly wouldn’t be playing and Roy Pritchard was doubtful.
As it turned out at Goodison the two full backs were Terry Springthorpe, (who had joined the Wolves, during the war after being encouraged to take up football by his father, a former Derby County player) and Alf Crook a local lad making his first appearance in the clubs senior side
The two reserve backs proved themselves well equal to the task, with Springthorpe keeping the famous Jimmy Delaney in check, and with the only goal of the match coming from Sammy Smyth, Wolves Irish international
Wolves were in the final.
The following Saturday April 9th – Wolves entertained Stoke City at Molineux – Laurie Kelly was still unfit and the two backs that day were Pritchard and Springthorpe we won 3-1
When the Wolves travelled down to Oxford for their overnight stay, Laurie Kelly was fit and well land though only regarded as one of the three reserves, he must have thought there was a good chance he would gain his right back position. and even after their arrival at the hotel in Oxford everyone assumed the the two full backs would be Pritchard and Kelly.
But when the final team placings were decided upon Laurie Kelly was informed he wouldn’t be playing. Now wether it was the bad news or thee manner in which he received it He immediately left the hotel and returned home.
A statement later released by the press, declared “ I was so disappointed in being left out of the team, I just wanted to get away from it all”
But you can bet Stan Cullis never had any doubt’s, No time to reflect on the feelings of individual players, this was up to him. so he dropped his first choice right back Kelly, switched Roy Pritchard into that position, then placed Terry Springthorpe who had performed so well in the Semi-final replay, to left Back.
And with this proven 100% fit team , he assured himself Victory would be ours , And of course it was.
Wether this is truth or propaganda :

At the time of the 1949 Cup Final, my uncle , was working alongside Laurie Kelly’s brother-in law, at Chillington tools, East Park.
He told me, , of a story being passed around the factory, at that time, regarding Kelly’s distressed withdrawal from the teams hotel at Oxford, and I quote
“Stan Cullis, for some reason, didn’t tell Kelly, himself, of his last minute decision not to play him ,at Wembley, but left it to Billy Wright to give Kelly the bad news.

Of Kellys Future –
Laurie Kelly, would now find the competition hard for a first team position at Wolves, and next season left to play for Huddersfield, were he would distinguish himself making over 230 League and Cup appearances. As a matter of interest , Huddersfield finished 3rd in the first division in 1953-54, with Albion in second place, and the Wolves, for the first time in their history, in top spot. In 1957 Laurie Kelly joined Nuneaton as player manager, but only stayed a few months and retired soon after.