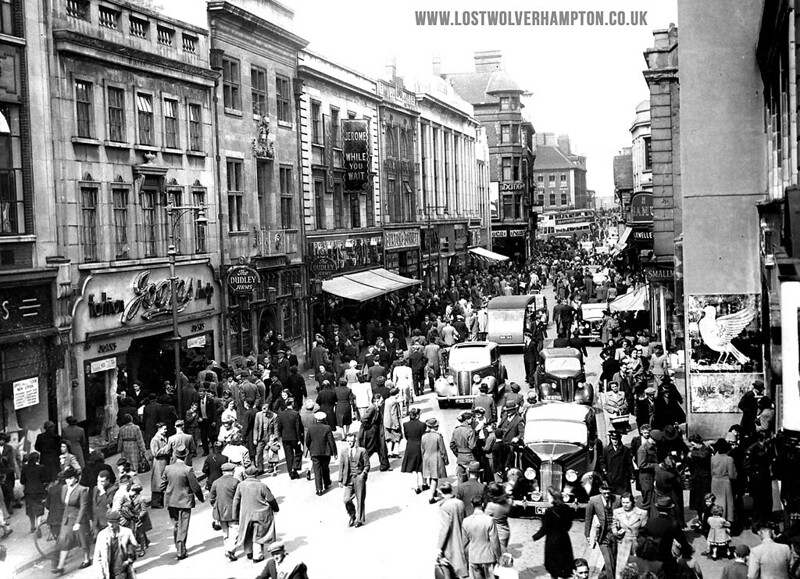 This crowded scene in Dudley Street in 1946, has a wealth of interest .
The view is toward Queen Square ,with the “British Home Stores on your left, and “Marks and Spencer” opposite on your right.
To the right of “Joans” ladies fashion shop, was the “Dudley Arms” public house, with a similar frontage to the “Giffard Arms” in Victoria street.
In 1954. “Joans” will move from this spot and re-locate in Queen Square on the corner of Lich Gates, in premises up till then owned by ‘Copes’ wines and spirit merchants, and British Home Stores will then extend and take up the space left by Joans.
Next door and above the “Dolcis” shoe shop was photographers, and I doubt there’s a family in Wolverhampton that haven’t a photo tucked away somewhere, that was taken at “Jerome’s”.
“Buxton & Bonnet were next door, they and Foster Bros (close by on the corner of Bilston street,) held the sway in town for smart childrens’ wear, should clothing coupon’s be available.
Across the road with the fading *“Dove of Peace” sign on the wall was the top menswear shop, the ‘Fifty Shilling Tailors’, and above the tailors, and the next door premises, with its side entrance, was the “Savoy ”billiard hall were most of the “sharks’ of the day would ply their skills.
But what makes this photo extra special for me, is that it shows a flat fronted electric milk float on its return journey to the “Levedale.”
The entrance to the Levedale dairy in the 40’s and 50’s, was situated at the far end of Dudley Street in between Two former public houses, the “Kings Head’ and the Hen and Chickens.”
*The ‘Dove of Peace’ was on a protruding wall on the east side of Dudley Street, close to Queen Street. It remained there till this building was demolished in the early 1960’s.
The story goes that the Dove was painted on the wall in 1939, to end an acrimonious dispute between to rival tailors businesses who were neighbours, Burtons and the Fifty -Shilling Tailors.