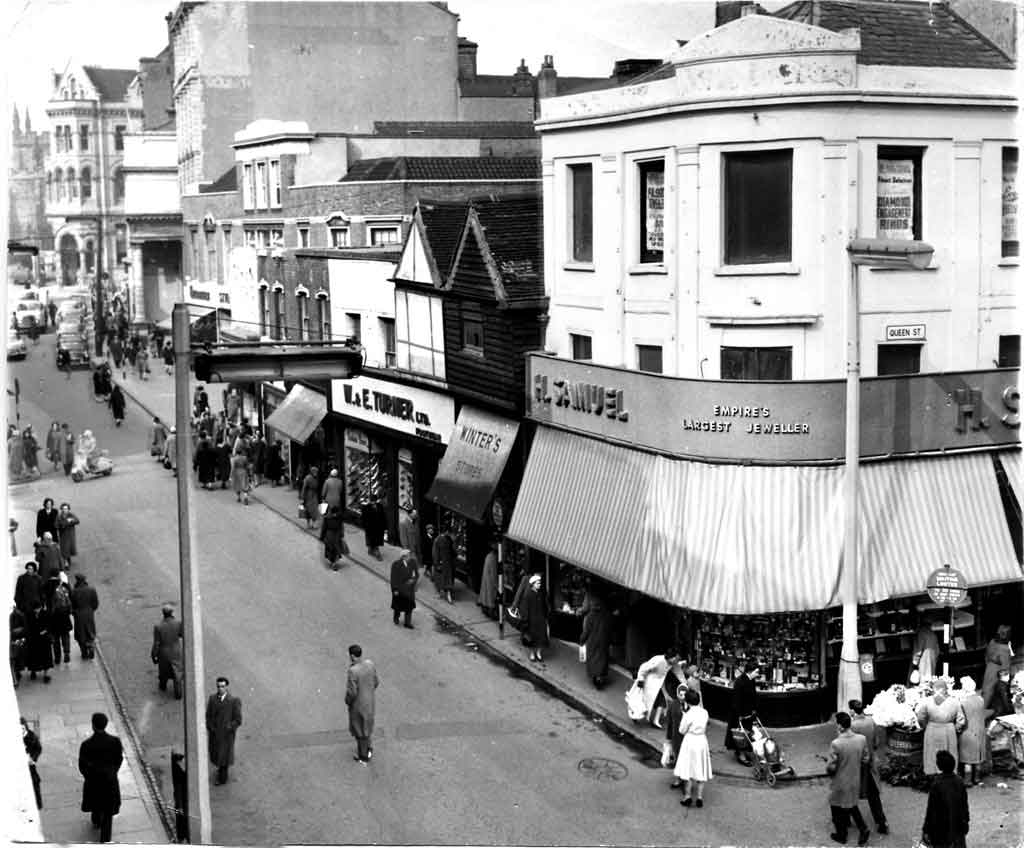 A forward looking plan was submitted of which it was said; this plan when adopted in its final form will enable future developments to take place in a systematic and orderley manner.

Each step will make its contribution to the shape of things to come Only in this way can we build a town of which we may be rightly proud.

You will notice looking at this evocative photograph of the row of shops between King Street and Queen Street in the 1950’s most of the people are women.

50 years ago far more men and youths went to work whilst their wives and mothers cared for their families and made sure there was an hot meal on the table at the end of the day.

I recall this little block well On the corner of King Street The Irish Linen Depot rated itself as “The linen cupboard of Wolverhampton”, whilst Liptons grocers had the adjoining two shops.

Turners shoe  dealers had 6 and 6a which was half a very old property reputed to be Tudor built the evidence being during a recent renovation it was found no nails were used on the original building.

The building was shared by “Winters” health food store some may recall they had a similar store in the Central Arcade at that time.

Of course on the corner of Queen Street was the instantly recognisable “Samuels” jewellers who have now removed to the Mander Centre. and the colourful corner display provided by Blanche on her three wheeled wicker basket carriage, Blanche was just  one of the many Flower sellers in Dudley Street at that time.

This familiar street scene like so many others for different reasons couldn’t last. Various changes were made  to adjust to a better Town Plan. New  architecture came into play, but in many cases  this hasn’t come off.

Regarding the Dudley Street Plan

In the 1960’s a discussion on the merits of demolishing  the Tudor properties the last vestiges to   hundreds of years of history in Dudley Street wouldn’t have come under discussion modernisation  was the name of the game  then, and many such buildings as those have been wiped from the landscape over the years. So as you can see ten years later they went.

And along came a lego styled Jewellery Centre in their place.

Not unpleasant to the eye, but the lack of variety amongst the businesses leaves much to be desired.