A potted history of Bilston Steel Works. Gone today in 2015 But will never be Forgotten.

Between 1866 and 1883 six new blast furnaces were built at Springvale. The furnaces were hand-fed and the molten iron was run off into pig beds. Despite the crude nature of production the furnaces produced iron of good quality and in large quantities.

By the early 1880s five blast furnaces on the site produced 24,944 tons of iron a year.
Expansion of the site

In 1897 the Springvale Furnaces and the Staffordshire Steel & Ingot Iron Co were amalgamated to become Alfred Hickman Ltd.

The site continued to expand. In 1907 the first mills powered by electricity were installed, an open-hearth furnace was built in 1911, followed by additional furnaces during the First World War. The Bilston works were a major industrial site. During the Second World War the company was an important shell-making centre and inn the early 1950s a £16 million development scheme was put into place.   Big Lizzy

In 1954 ‘Elisabeth’, a new blast furnace, was lit replacing three smaller blast furnaces. Elisabeth alone produced 275,000 tons of steel a year. In her lifetime she produced more than 5.5 million tons of pig iron.

The furnace was named Elisabeth after the daughter of the chairman of Stewarts & Lloyds Ltd, the owners. However the workmen who worked the new blast furnace called it ‘ Big Lizzy’!

With the completion of major redevelopments the Bilston works became one of the most modern integrated works of its kind in the country. 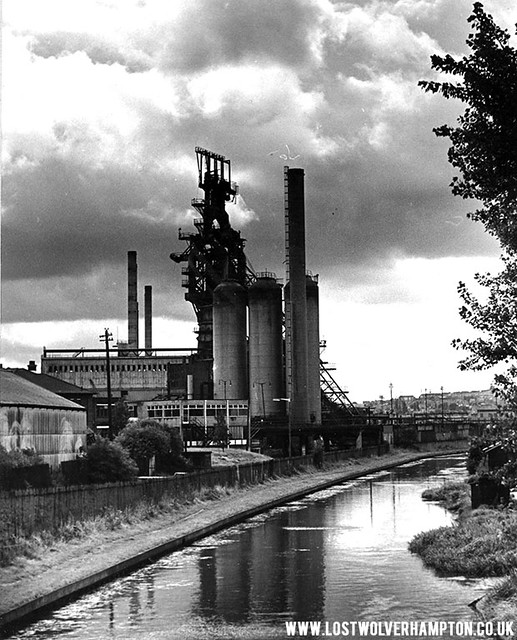 However despite all the works modifications by the late 1970s the site had become uncompetitive and expensive to run. and on the 12th April 1979 the last steel billet was cast at Bilston, so ending more than 200 years of iron and steel production on the site.

It was the end of an era and a major blow to the economy of the area.

As this photograph proves taken with a telescopic lens from the top of the Express & Star it certainly dominated the skyline above Bilston some three Miles away.

With Grateful Thanks to The History of Wolverhampton The City and its People for the added information.