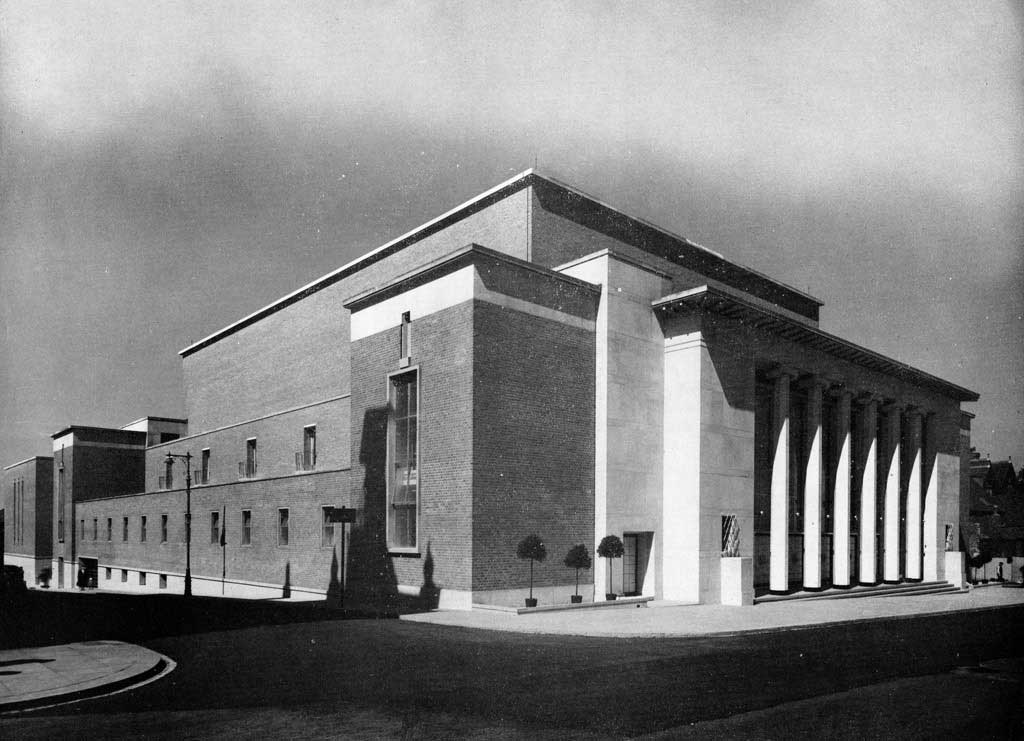 Modern architects have rediscovered the old axiom of the Greeks, that “the greatest utility is the greatest beauty,” and Wolverhampton’s Civic hall supplies a practical illustration of its truth.

“Where did it all go Wrong?” I can hear you say!

As most of you will know by now I lived within a few hundred yards of the Civic Hall in North Street which featured just after the war three wonderful exhibitions which I attended. The first as I recall was the Wolverhampton Road Safety Exhibition which I went to as a ten year old in June 1947.

The purpose of the exibition was to publicise to both adults and children the importance of Road Safety and of course part of the show and the main attraction was an appearence in the basement, of Herman Goerings Bullet proof car captured by the British Army and previously exhibited for War Charities.

Looking at this cheeky card sent during the war from Blackpool featuring Herman you have the feeling he won’t be hanging on to any of his personal belongings for too long.

The safest car (for the passenger) ever built.

The section dedicated to the car is just one paragraph amongst so many, such was the amount going on at that exhibition It does though add a little to our knowledge of the car:

“This car, which weighs five tons, is driven by an eight cylinder supercharged engine of 7.7.litre capacity, each cylinder being fitted with two plugs and dual ignition. The body is well proofed against small arms fire, and as a protection against grenades or mines has a specially fitted steel floor. The bodywork includes bullet-proof steel fitted into each door panel, the windows and windscreen are of 5-ply glass one and threequater inches thick, and marks from British rifle fire indicate that it is really bullet proof. The back of the car is protected by a retractable steel door.”

HAVE A GO! Charge a Shilling

And in the Green Room was the Miles Trainer …“an electronically operated device which enables the motorist – actual or potential- to steer a course over the equivalent of many miles of road just as if he or she were travelling in an ordinary car.”

There was also some detail regarding the ‘Children’s Own Road Safety Training Section’, which occupied the Wulfrun Hall Hall for the week:

“There is no more urgent problem than the safety of our children. In this Toy Town your children will be taught road safety and they will demonstrate to you, using pedal cars and fairy cycles. “This is not a playground but a serious attempt to teach children in an attractive way”.

Imagine how urgent a problem the organisers would see in today’s traffic!

Other attractions included a Cinematograph Exhibition in the Central Room; basically a series of hourly films on various aspects of road safety.

All of this taken from just one page of the programme, and as you might gather with Goering’s car being exhibit 67, there was certainly a fair bit going on at the Civic and Wulfrun that week.