But this extended apartment block today houses a very important link with just one famous Wolverhampton achievment from the past.
that sent a thrill around the world.

And how do we know this?

The very substantially built, attractive, medium sized freehold Residential Property known as “Bromley” Situate at Penn, out of the Borough, a few minutes walk from the Tram Terminus, Nock and Joseland have received instructions from the Owner and occupier to sell by auction, at the “Star & Garter” Hotel, Wolverhampton, on Wednesday, 12th March, 1919, at 6 o’ clock in the evening.
Printed by: Barford & Newitt Printers Queen Street, Wolverhampton.

The owwnership is confirmed by the facts shown on the catalogue of contents.

The brochure reads: Messrs Nock & Joseland have received instructions from LOUIS COATALEN, Esq. to SELL BY AUCTION the contents of ” BROMLEY” PENN, near WOLVERHAMPTON the sale will be held in the marquee adjoining the residence.

Of all the items sold at the sale. The 8-day Grandfather Clock in Oak Case” I am led to believe, stands proud today in Bantock House after lately being donated to the museum by its former owner.

It was certainly Mr Coatalens ambition to design and build the the Fastest Car in the World which brought to fruition the 1,000 Sunbeam,and it was certainly Major Segrave’s ambition to drive it.
It is seen here with Major Segrave at the wheel, photographed on the sands of Daytona just before the wonderful performance when 200m.p.h. was attained for the first time on land. 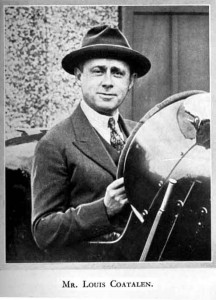 Louis Coatalen, Director and Chief Engineer; the driving force behind the team at Moorfields Works whose genius produced the Sunbeam car, on which the record speed of 203.7298m.p.h. was attained. 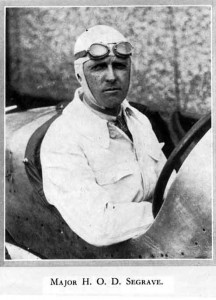 Major H.O.D. Segrave,who drove the 1,000 Sunbeam, and thus gained the distinction of being the first man to attain a speed on land of over 200m.p.h.

“Bromley” on the Penn Road next to Muchall Road “Thats the Place”
Was it here sitting in his study at ” Bromley” that Coatalen conceived the idea of building the Supreme Sunbeam. I wonder?