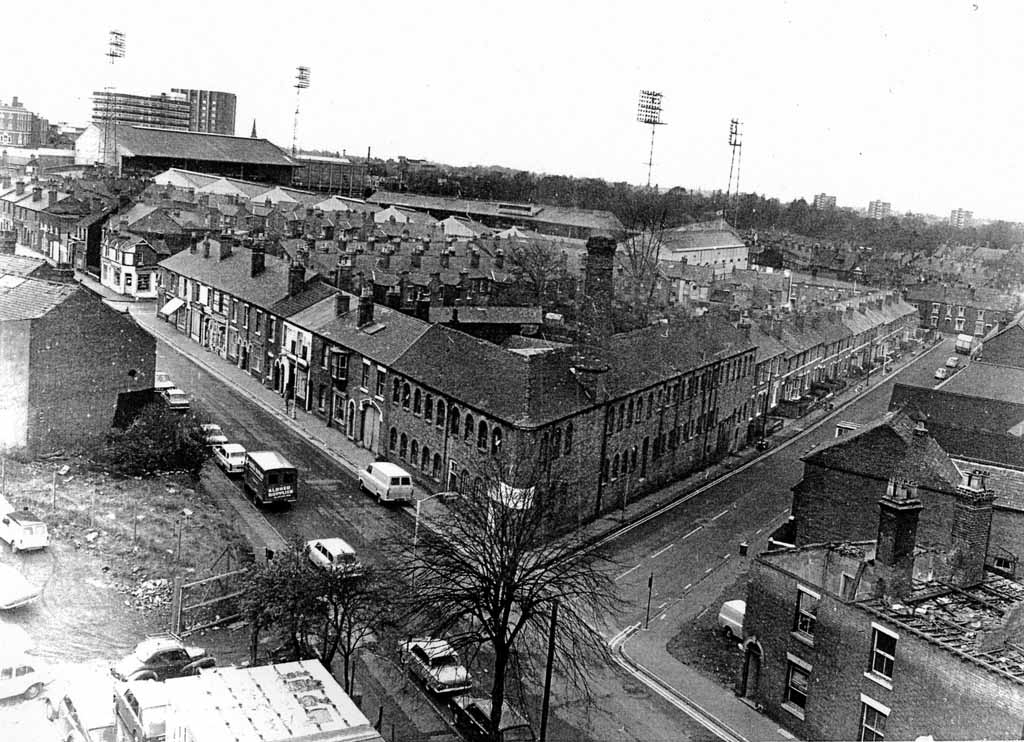 No. 2 on the map – Albert Marston, Wellington Works North Street.

During the last War they turned out thousands of hand grenades but prior to that they were Lock Manufacturers. To give you an idea how important a part they played in Wolverhampton commerce; it was claimed by them in 1961 that 10% of all new houses built in the country last year had their locks and door furniture made solely by the Marston Lock company.

Now less than twenty years later Marstons have since vacated the building, and it stands derelict on the corner of Birchfield Street; solemly awaiting demolition along with the rest of the properties in North Street, all of Dawson Street on the left, and Birchfield Street on the right. Within ten years all of the buildings in the area would be gobbled up by the extensions to the Molineux Grounds.

For twenty years – starting in 1955, the area surrounding Stafford Street and North Street has been forever undergoing re-construction, and now, here in 1978 probably the last resident of Nursery Street – a quiet cul-de-sac in between the two, is awaiting the final outcome.

The bottom house, on the left hand side of Nursery Street during the last war, was occupied by a Mr Fisher. He was known as Bunkeye to us kids, because of his affliction; he had a cockeye.

Mr Fisher was night watchman at the aforementioned Marston’s Lock factory which in 1941 turned over to Ammunition Production. The factory was making Mills Bombs and although it was situated just a few yards from the bottom of our street, what few stray bombs that fell on Wolverhampton never affected life in Nursery Street.

But now thirty years later it came! What the war had failed to do to us, the peace was about to accomplish. On her doorstep at No 29 Nursery Street (not unlike an unfortunate Berliner in 1945, awaiting the Allied Armies advance, and the total destruction of her once great city), stands the forlorn figure of Mrs Eva Roe, and her faithful German shepherd dog.

All alone now, her husband long gone, and son Trevor living away. She is probably now the only resident left in this once well appointed Victorian terrace.
Eva, has stood and watched the destruction of Vincent Street, Dawson Street, and Birchfield Street and still looking West, instead of seeing the advancing American’s, she gazes across what was once North Street with anxiety as construction workers move on to the derelict ground.

The end is near Eva, but don’t worry! The Russians aren’t coming from the East along Stafford Street. The new University – Polytechnic, is racing to occupy this ground, and you will be found a new home. All that will be left of your happy times spent in the shadow of St Peters, will be your memories.