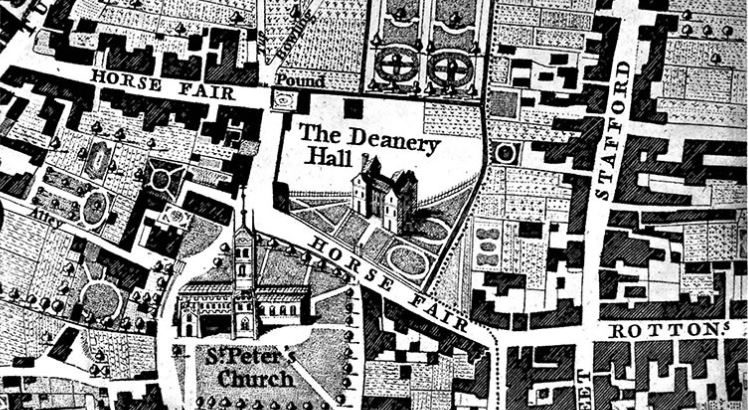 WOLVERHAMPTON A TALE OF TWO CITIES

My pictures and stories I hope will illustrate the many changes which have taken place in Wolverhampton at various times particularly in relation to the street scene and general landscape.

If you recall in part 2, I was talking about Bluecoat School, but if you missed it, follow this link:

“That the whole site, less that portion required for street improvement purposes, be utilised for the provision of a Technical School”

The Deanery having in this manner passed into the hands of the Municipal Authorities for education purposes, it then became necessary to determine in what way the site was to be utilised for the erection of a Technical School, and whether the old building was to be incorporated in the new school, or to be destroyed.

Many local people were outraged at the suggestion of this Historic building should be destroyed and there was a huge outcry culminating in a wonderful brochure being published by Geoffrey LE M. Mander, Wightwick Manor. Wolverhampton.

The Case for the preservation of the Old Deanery, WOLVERHAMPTON.

The object of the following pages is to set forth a moderate and reasoned statement of the case of those who think that the Old Deanery both can and should be preserved without conflicting with any reasonable point of view, while greatly adding to the credit and distinction of the ancient town.

Apart from this, here related may be found to be not without interest to lovers of old

I have used this text  as the number one source of this  brief article.

As early as 994 AD, the pious Lady Wulfruna founded a Monastery at Wolverhampton.

At the time of the conquest the founder’s intentions were allowed to continue and we find it in possession of a Dean amongst other ecclesiastical officers.

This Royal Free Chapel, or Collegiate Establishment, continued to be intimately associated with the history of the town for many centuries.

By an Act of Parliament in 1848, all the deanery property was vested in the Ecclesiastical Commissioners, and St Peter’s church was made a Rectory, with an endowment of £750 a year.

The last Dean received about £640 from rents and royalties, and the seven prebends smaller sums.

Save for the ceremony of installation, the presence of the Dean in town was probably of rare occurrence, owing to the superior attractions of Windsor.

For this reason an official residence was hardly necessary.

But in the fourteenth century such a dwelling place did exist, and was called the “Manse” It may be suggested that the site of this building was that of the old house, which is now known as the Deanery, or earlier as the Deanery Hall.

An examination of the said building the date of which may reasonably fixed at about 1667, revealed signs of an earlier (sixteenth century) edifice, notably in the central chimney.

Sir Simon Degge (b.1612; d.1703), Recorder of Derby, J.P. for Staffordshire and an antiquary of some standing, says, in his Additions to Erdswick, referring to Wolverhampton:-

This town is pleasantly situated upon a sandy hill, where upon the Dean’s land, Richard Best, first a Stationer in Gray’s Inn Gateway, and then a Farmer of the Excise to the Rebels.  He built a very handsome brick house in 1657, with a walled orchard and garden .

“Which standeth near the church, on the highest ground of the town. something after the style of Groombridge Place, Sussex, with strong Wren characteristics.”

The structure and style of a house may be taken, to a certain extent as an expression of the mind for whom it was built. It is interesting, therefore to consider what manner of a man this Richard Best was .He was evidently of considerable wealth and standing, and with a cultivated taste for the beautiful.

Many well known public figures would live at or visit the Deanery in later years.

One such person was William Wood, who was an iron manufacture and owner of several mines in various parts of the country who lived here at the 1692 until 1713.

(William Wood’s father, first settled in Shrewsbury, where he changed his original name of Dubois to its English equivalent, Wood.)

He was born in Wolverhampton, July 31st, and baptised at St Peter’s on August 10th.

Owing to a shortage of copper coins in Ireland, William Wood obtained the government contract for the coining of their Halfpennys.  As they were lighter and smaller than the previous coinage, they were scornfully dubbed “Wood’s Farthings” by Dean Swift* in his famous Drapiers Letters of 1723.  The appearance in the first of Swift’s two penny tracts was the beginning of storm of satire and recrimination directed nominally against William Wood.

He was described by Dr. Johnson in his essay on Swift, as “of Wolverhampton, Staffordshire, a man enterprising and rapacious.” Wood married Mary Molyneaux, of Witton Hall, Staffordshire.

The massive iron railings which St Paul’s Churchyard cast by his son William, at the Falcon Iron Foundry, to order of Sir C. Wren.

John, the third son, was the grandfather of Richard Fryer, first M.P. for Wolverhampton.

Charles, the fourth son, was the grandfather of Mary Howitt, the poetess.

It is probable that most of Wood’s children were born at the Deanery, as he lived there from the age of 21 to 42.

He died in London and was buried in Wolverhampton on the 6th August 1730.

* Dean Swift was of course Jonathan Swift, English author  – Born in Dublin of English parentage in 1667.

In 1726 he wrote Gullivers Travels – a satire on parties and statesmen. Now a classic of children’s literature. He died in 1745.

Many illustrious tenants occupied the house until 1877 when it was used as the Conservative Club.  During this period it entertained many well known statesmen such as Lord Randolph Churchill, Lord Salisbury, and Mr Balfour.

From 1904 it served as the headquarters of the local Royal Army Medical Corps (Territorial’s) and by 1914 it was said to have been allowed by the Ecclesiastical Commissioners to fall into a lamentable state of disrepair.

It was just “Pie in the Sky”

As previously mentioned The Wolverhampton Town Council purchased the Old Deanery House and grounds, and had decided;

“That the whole site, less that portion required for street improvement purposes, be utilised for the provision of a Technical School”

“The Deanery having in this manner passed into the hands of the Municipal Authorities for education purposes, it has now become necessary to determine in what way the site is to be utilised  for the erection of a Technical School, and whether the old building is to be incorporated in the new school, or is to be destroyed.”

Many local people were outraged at the suggestion of this Historic building should be destroyed and there was huge outcry.

A Committee was formed to prove to the powers that be, that there was certainly a case for the preservation of the Old Deanery in Wolverhampton.

The verdict of the Corporation was that the Old Deanery is of great archaeological value, and is worthy of preservation at all costs, in view of the scarcity of historic buildings in Wolverhampton.

The Society for the protection of Ancient Buildings has expressed the opinion that the Old Deanery is a building of unusual interest of the late 17th century design, and is capable of being structurally repaired at a moderate cost.

The Society strongly urges the preservation of this building, not alone because it is one of the few remaining old works of Wolverhampton.  But also because it is a standard example of the domestic architecture of the Wren period.

The Ancient Monuments Board, an official body with far reaching legal powers, appointed under the Act of 1913, has approached the Wolverhampton Corporation on this matter.

The art Committee of the Town Council, and several other bodies, have also passed resolutions in favour of the preservation of the Deanery.

Similar views have been expressed by distinguished men who have from time to time visited the house, and whose opinions are of value on such a point.

He would be a bold man who put his personal feelings against such a weight of authority.  It may be said that the recognised art of the country, in every case where they have considered the question, are emphatically in favour of the preservation of the Deanery from an artistic standpoint.

Is it not, therefore the bounden duty of those in authority to see how far possible to combine the proposed Technical School with the existing Deanery building on the site?

Unfortunately the Desire was there, But the Will wasn’t!

The Deanery as it might be. Forsyth’s plan for the Technical School incorporating the Deanery.

The Wolverhampton & Staffordshire Technical College. Was to be our legacy.

The demise of North Street will be continuing shortly with…