Do you remember the Bluecoat School?

Well, in this series, I hope my pictures and stories will illustrate the many changes which have taken place in Wolverhampton since 1750, particularly in relation to the street scene and general landscape.

If you recall in part 1, I was talking about North Street, but if you missed it, follow this link:

In this second part, I continue the story of North Street with the Tudor buildings and the Bluecoat School.

Another Point of View 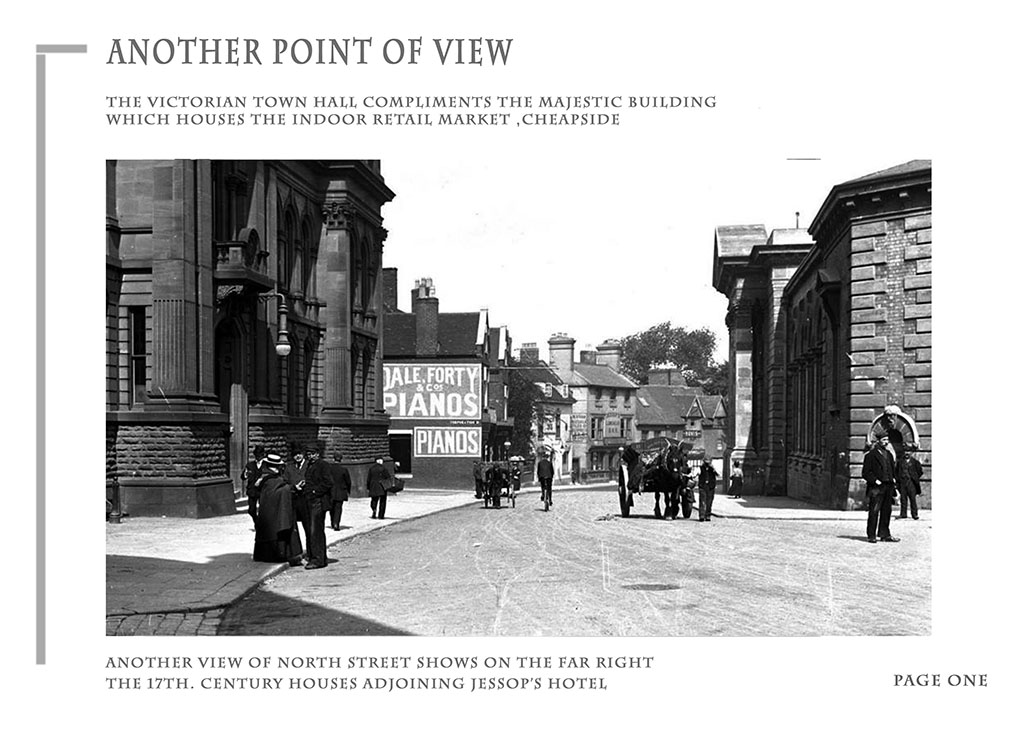 This is another view from Corporation Street, this time a slightly extended one bordered by, on the left, the Town Hall (1869), and the Market Hall, built in 1853.

Peeping out in the background, above the horse and cart, is perhaps the oldest building in North Street. It is a remnant of the 17th century.

A Remnant of Tudor Times 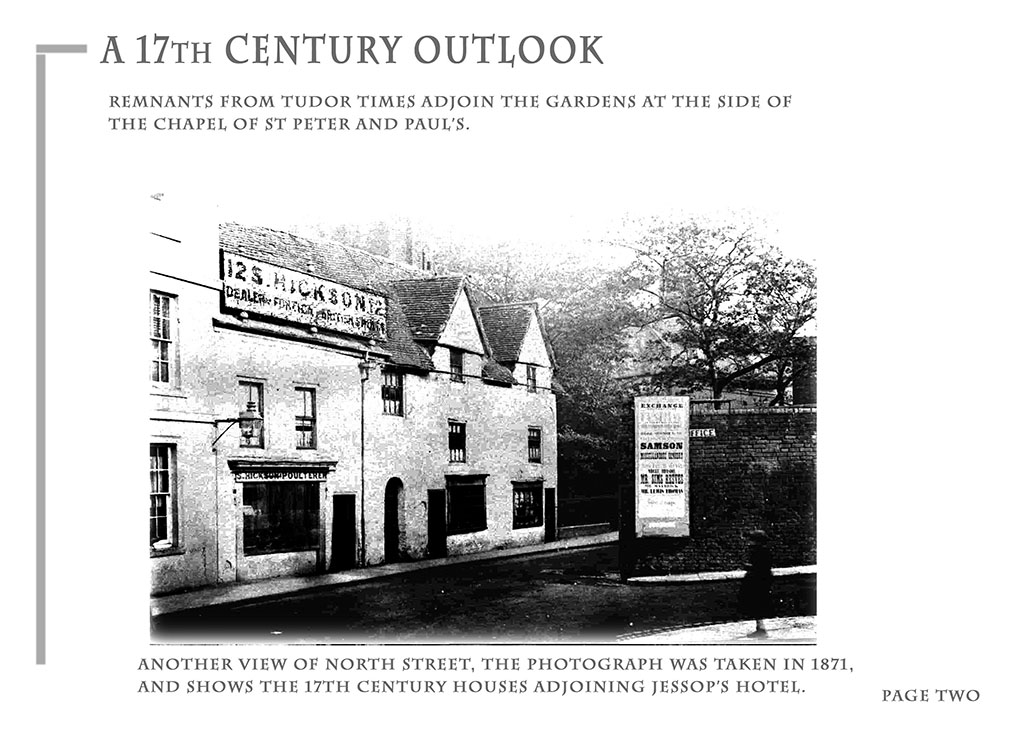 When this photograph was taken in 1871, no. 12 was the home of Mr S. Hickson, a dealer in foreign and British fruits. The poster on the opposite wall, on the corner of St Peter’s Walk, advertises a Festival at the nearby Exchange Hall in aid of the Hospital.

Adjoining the 17th century building were the gardens at the side of Chapel Yard and Paternoster Row. These belonged to the Catholic Chapel of St Peter and Paul.

On this land ten years later in May 1881, a purpose built premises were erected to house the Bluecoat School. 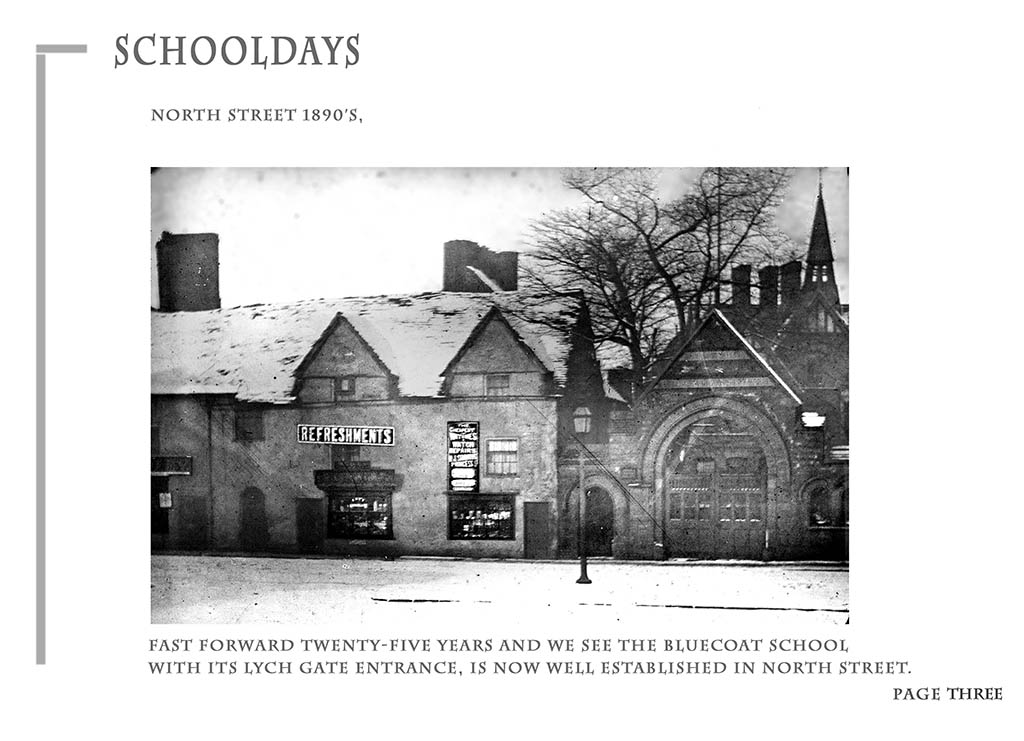 The Bluecoat School was the oldest and most substantial charity in Wolverhampton. It was established sometime between 1696 and 1700 for the poor of the town and was funded in a number of ways.

Its small endowment was supplemented by legacies, subscriptions and donations from the well-to-do. It was run by twenty-four trustees and provided boarding facilities and a “sound, practical and religious education” for poor children.

In 1877, the School’s annual income was £400, augmented by collections at St. Peter’s Church. With this, it was able to clothe about eighty children and board a further twenty.

For a time in the mid-Victorian period, the School”s Honorary Secretary was Charles Mander, varnish manufacturer.  In the twentieth century, the School became a day and boarding school for girls only.

The school moved to North Street from a site on Little Berry Street, which today would have been at the side of the old General Post Office Building in Princess Street.

A Trot Through Horse Fair 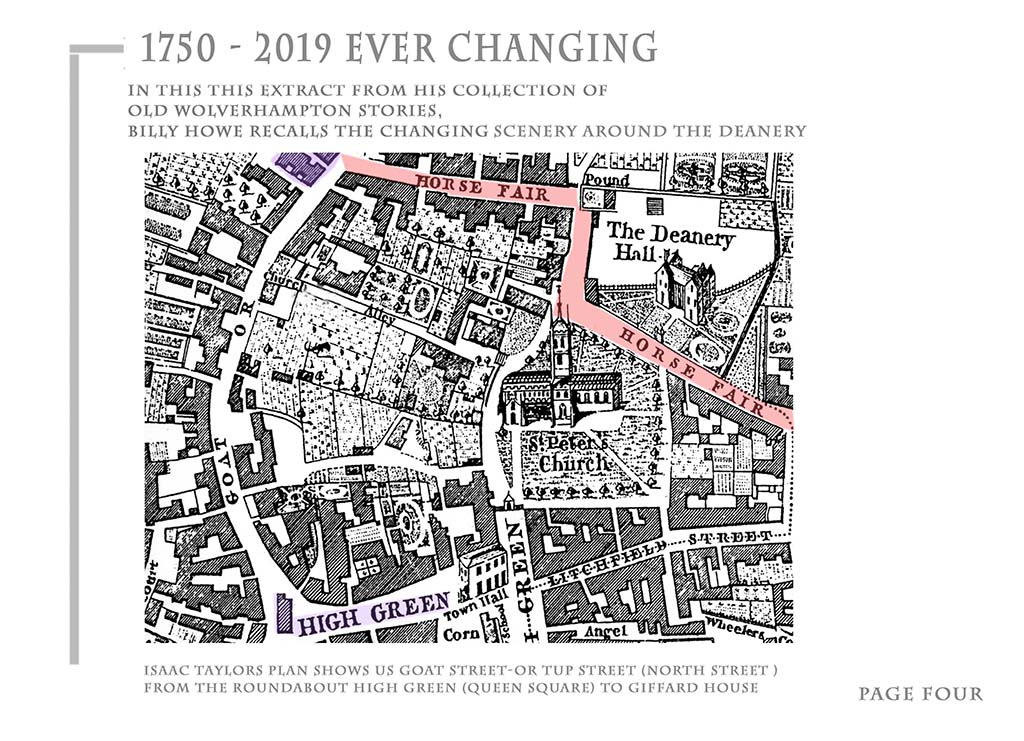 If we shoot back 100 years, we can see this same area between High Green (Queen Square) and Giffard House shown on Isaac Taylors map of 1750. On here, it consists mainly of gardens belonging to the The Deanery and Prebend houses. These were homes of the Dean and several prebendaries (priests), whose task it was to govern the town.

There were a few houses and workshops scattered around, with street names such as St Peter’s Square, Deanery Row, Lawyers Fields, Prospect Place etc. These names lingered on around North Street right up until the 1950s.

Horsefair was a zig-zag route that ran from the junction of Canal Street (Stafford Street) and Little Berry Street (Princes Street). It travelled west, passing St Peter’s church on its left and The Deanery Hall on its right. It turned a sharp right toward the new St Peters’ burial ground, and from there a left into North Street. The turn was at a junction just south of Giffard House.

This area at that time was  specially reserved for showing the trotting capabilities, and for the sale  horses, hence the name, “Horsefair”.

In the next part of my picture book we will look at “The Deanery” in more depth.