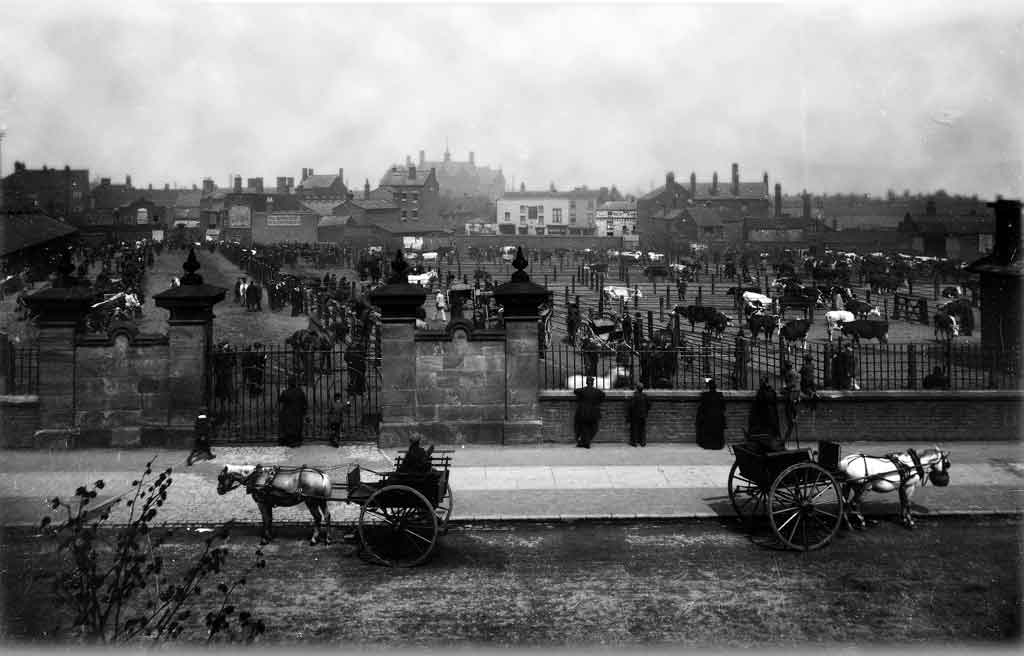 The old cattle market for which Wolverhampton at one time was famous, was held from 1849 on a site adjoining the existing abattoir site in Cleveland Road.

The market was held weekly for the sale of Horses and cattle, and in the earlier years of its existence was reputed to be, one of the largest and best attended, in the Country.

The market continued to function until the 1920s when the horse trade rapidly declined, and just prior to 1929 a later abbattoir was built on part of the site, leaving just a few pens for the cattle dealers
With the advent of rationing in 1940, the dealers pens became redundant and all grading of animals was conducted from auction yards acting as certifying centres for the Ministry of Food.

Thus the corporation cattle market went out of being the business passing into the hands of auctioneers who owned sale-yards in the nearby vicinity.

Now you might say the rest of this story is Tripe, (No its not about political jargon), Tripe was also a popular meal in the 1920s and 30s, prepared from the intestines of ruminant animals (cattle sheep, goats etc). It was usually cut into slices and served with milk and onions, and was regarded as the most easily digestible, of all meat foods.

The corner of North Street at the close of the Great War. No.1 North Street is taken up by Andre et Cie confectioners, their tea rooms are next door, and the sign U.C.P. peering out above No. 1a, advertises a Mister C. Holmes; a tripe dresser.

Two public houses The Tiger and Town Hall finally make up this little block between Darlington Street, and Blossoms Fold.

Many older Wulfrunians will recall the ‘Tripe Shop’ a shop and cafe in North Street which the Holmes family ran between the wars, which was well patronised by callers at the markets and the Hippodrome theatre close by.

I believe C. Holmes Ltd had started their tripe dressing business in Colman Street, Whitmore Reans, and later removed to larger factory premises in Tower Street this around 1920. Always keeping there eating house in North Street.

Looking across Forders Car Park in Bilston Street – when the mid 1960s heralded the end of an era in Wolverhampton for Tripe Dressing and certainly here, from The Tower Street Works, of C. Holmes, whose well inscribed chimney stack was seen for many years towering above Tower Street and Bilston Street.

By the 1970s the demand for tripe had come and gone and the works were in the hands of ‘John Holmes’ (probably a son.) who was baking and distributing his popular (Creemy Pies) from there.

This John Holmes the new occupant, at one time had factory premises in Fern Road off Lea Road.

Today all the land between Tower Street seen here and Bilston Street, (which, as I said before, was on the other side of the stack) is taken up today by Wolverhampton Police Station.

Finally the Last word on Tripe.

Being a growing lad during the war was no time to be finicky over food, “get it down you, while you can was my motto”. So I eat everything put in front of me on a plate, including many obscure parts of animals: hearts, kidneys, liver, brains. tongues, necks, feet, and some intestines.

But I drew the line on Tripe. To me It resembled “Boiled Knitting”.