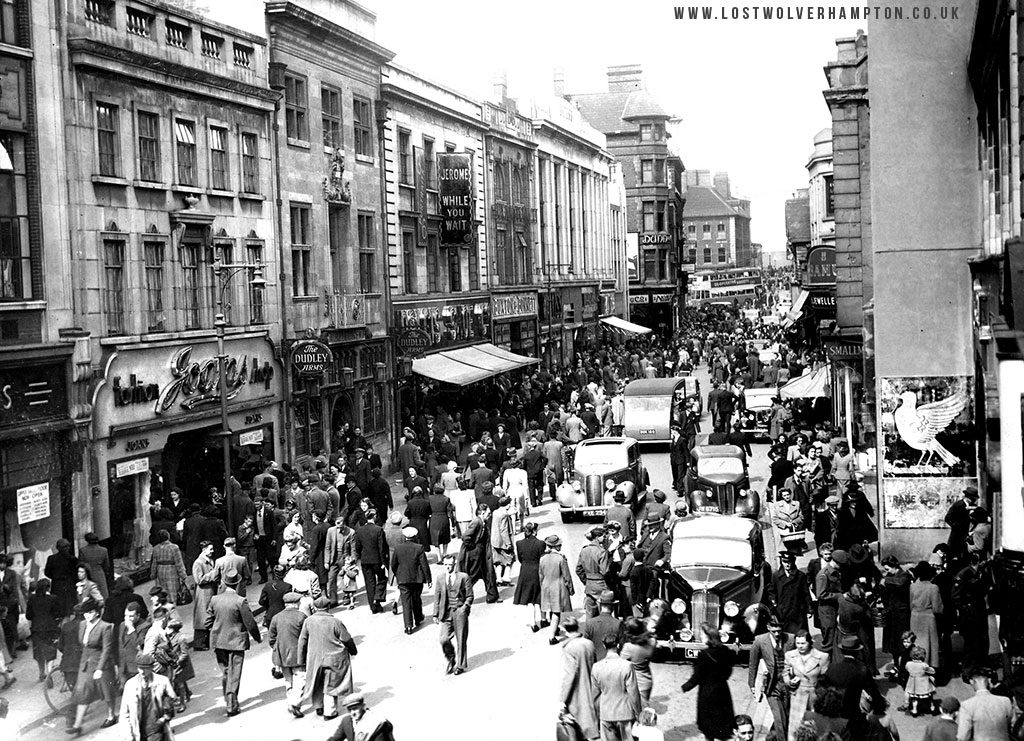 ONE ROAD TO PARADISE

There was a time when my town of Wolverhampton belonged to the people and what bit of motorised traffic there was shared the roads and street with pedestrians in complete harmony, as seen here in our main shopping venue Dudley Street.

This view during a busy Saturday looks toward Queen Square. The “British Home Stores” is on your left, and “Marks and Spencer” opposite on your right.

To the right of “Joans” ladies fashion shop, was the “Dudley Arms” public house, with a similar frontage to the “Giffard Arms” in Victoria street.

In 1954. “Joans” will re-locate in Queen Square on the corner of Lich Gates, in premises up till then owned by ‘Copes’ wines and spirit merchants, and British Home Stores will then extend and take up the space left by Joans.

Next door and above the “Dolcis” shoe shop was a photographer’s, and I doubt there’s a family in Wolverhampton that doesn’t have a photo tucked away somewhere, that was taken at “Jerome’s”.

“Buxton & Bonnet Tailors” were next door, and the Foster Bros (close by on the corner of Bilston street,) held the sway in town for smart children’s wear, should clothing coupon’s be available.

Across the road with the fading “Dove of Peace” sign on the wall was a top menswear shop, the ‘Fifty Shilling Tailors’. Above them, and Burtons, next door with its side entrance, was the “Savoy” billiard’s hall where most of the top players of the day would ply their skills.

But what makes this photo extra special for me, is that it shows a flat fronted electric milk float on its return journey to the “Levedale”, and I might just add at that time no eight-year-old knew this street better than me.

It was because of my early association with the Levedale Dairy.

“Two sterilised and one Fresh” for the Dymar (A Ladies outfitters in St John Street) and the final delivery on the town milk round in the late 1940’s.

It was as I recall at the end of the war I first heard that call.

In the 1950’s Skimmed was a name connected to bouncing smooth pebbles of ponds. Sterilised was the king of the Milk Trade.

Most people in my youth used to drink sterilised milk. This was the norm because the fresh milk would go off in the hot weather!

Especially if no-one was at home when the milkman left it on the doorstep in the sun!

And talking of sun. I remember that warm summer of 1945 I couldn’t wait to get out of bed in those days during the school holidays I felt so important I had a proper job. Helping my Aunt on her Milk Round.

My father’s sister Eileen, living with her husband Sam Docherty in lodgings in North Street, close to Nursery Street, where I lived had recently left Goodyears and started at the Levedale Dairy, where she became part of a team of young ladies driving Electric Milk Floats on local routes around Wolverhampton.

As I recall the longer routes on the outskirts were served by men with petrol vehicles.

Although it was a practice frowned upon by the authorities at that time. It was common practice for youngsters to assist their local delivery men and women on their rounds to earn a bit of extra pocket money.

In the course of the conversation, my aunt had approached my dad and asked if he thought I would like to help her on her rounds. I jumped at the chance.

And little did I realise then, that from this small beginning in 1945. until I left school in 1952. would stand me in such good stead later in life, adding to my knowledge today of Old Wolverhampton and its people.

NOW WHERE WAS THE LEVEDALE DAIRY?

The Levedale dairy in the 1940’s and 50’s. Situated at the far end of Dudley Street, Its entrance being in between two former public houses, the “Kings Head’ and the Hen and Chickens.”

Pictured here in the late 1930’s. A unique view in the town centre of Three Licensed Houses standing next door to each other.

On the left “The Swan and Peacock, Ansells”, “The Hen and Chickens, Atkinson’s”, and finally “The Kings Head Butlers”.

These three houses were situated at the start of Snow Hill and the end of Dudley Street.

In between the Kings Head Dudley Street and the Hen and Chickens Snow Hill was an opening which led through a narrow passageway to the large yard and building premises of The Levedale Farm Dairy.

This evocative scene pictured above is probably how the approach to the dairy would have looked to my aunt when she started there during the war.

Two of these three Licensed premises; The Swan and Peacock and The Kings Head carried on serving beer into the late 50s until they both succumbed to the arrival of the Wulfrun Centre

But when I started visiting the dairy, the then de-licensed Hen & Chickens had now become a short-lived amusement arcade, one of three in and around Dudley Street and Snow Hill at that time. and before the building met the same fate as its old companion, The Peacock, it was used as a television and record store owned by Cliff & Halifax.


Notes on the Map:

It shows Dudley Street and Snow Hill on the right and the three Public Houses that fronted the Dairy.

It shows, Bell Street running from Victoria Street to Snow Hill. The Gentlemen’s Urinal at the side of the rear exit from the Dairy. The white oblong patch will contain a large Water Tank during the War, and in the 1950’s, when emptied become a Car-park for Levedale Dairy (see final collage)

A few short months passed with me working for the dairy with my aunt, and joining her at home.

Frank Meakin, the manager at the yard welcomed me into the fold.

My aunt who at that time was the Relief driver would take on the other girls routes on their days off, But her main route was the town centre round and this is the one I recall, with great affection.

One of which are the previously mentioned “Dymar” Ladies Outfitters.

Of course, you must remember that back then the town centre was mean on road traffic. Manoeuvring through the streets and alleys was not a problem.

Those were happy days, discovering diverse locations across the town where our customers lived.  Many hidden well out of the public gaze. It was amazing.

With bottle in hand, I would climb flights of stairs to reach homes situated on top of many old buildings.

Places like the Queen’s Arcade, in the Square and The Royal London buildings.

I got to know most of the tenants in and above the many shops and offices in town quite well. They always seemed to have time to share a story or two and to put the icing on the cake.

At certain times I had the chance to take the steering wheel in quieter locations.

Although my Aunt left the Dairy a few years later I carried on. It would be around 1950 I got my permanent Saturday morning Job.


Now as a thirteen-year-old youth, I had already collected the customary Youth work permit from the former Art School (now the Youth Employment Bureau in Art Street). So I could deliver newspapers for our local paper shop owned by Mr Marsh situated on the corner of Dawson Street and North Street.

Now with this document in my possession. I took on a permanent Saturday day job at the dairy on the longer routes. One of these routes commenced at 8.30am on the Willenhall Road. Travelling down Stow heath Lane and on through Bilston and Darlaston finishing around 4.30pm in Wednesbury.

After a week of school, this job was more like a pleasurable past time than work. I was out and about visiting places I had never seen.  Meeting people from all walks of life, every Saturday collecting the “Milk Money”.

Those days certainly gave me a huge feeling of self-esteem. Coupled with the fact that Ron, the driver was a joy to be with who handled our brand new flat fronted Austin “Three-way” like an expert.

The other round I used to help on was with an equally pleasant driver, whose name escapes me now. In our smaller but certainly comfortable Austin Somerset pick-up, we covered a large distance which commenced on Stafford Road close to the “Golden Ball” at Coven.

What a delight to discover village’s in the area with such quaint names as Slade Heath, Paradise, Moseley etc.

Another series of calls we made was at “Brinsford Lodge”

Then a collection of Nissen type huts containing so many rooms. These occupants my driver called D.P.s (“Displaced Persons” “Probably one bottle of Sterilised milk one last each customer a week.

We usually left Brinsford around 4.00pm. Then after calling around Bushbury we arrived back in Dudley Street to unload about an hour later.

One most enjoyable stop over I must mention was at the “Three Hammers Farm”, on the main Stafford Road. We would drop off empties and pick up a further supply of milk left there for us by the relief lorry from the dairy.

A lovely man Dick Walley full of wonderful stories was living there at that time. Many of these tales he shared with me during our time spent there.

In the 1920’s he had started his own business as a retail fruiterer. Afterwards, he started the firm of R A Walley limited in the Wholesale Market in Wulfruna Street. Which later became Francis Nicholls, Walley and Dickinson’s Limited in the 1960’s.

Sterilised Milk was on everyone’s breakfast table in the 1940’s. Gold Top for mothers to be and Blue Top and Grey Top for a treat.

Dick Walley A perfect Gentleman always courteous and polite to man and boy.

Bell Street circa 1960 looking toward Snow Hill. Taken from the roof of Odeon Cinema in Skinner Street. Showing the then rear entrance to the dairy adjacent to their large vehicle parking lot. In the background the formidable C7A building in course of construction.

Those Saturday excursions courtesy of the Levedale dairy spent during those six or seven years after the war. I look back on today as very special moments in time.


As the shoppers leave the likes of Poundland and Primark through the large glass doors of the Wulfrun Centre, I wonder if there is anyone amongst them who hesitates, as I do and glance to their left.

Do they hear the ghostly purr of an electric truck as it left the old dairy some seven decades ago?

Today and every day. I thank God. Memories have lasted longer than dreams.