“Howes Life” with the Lions 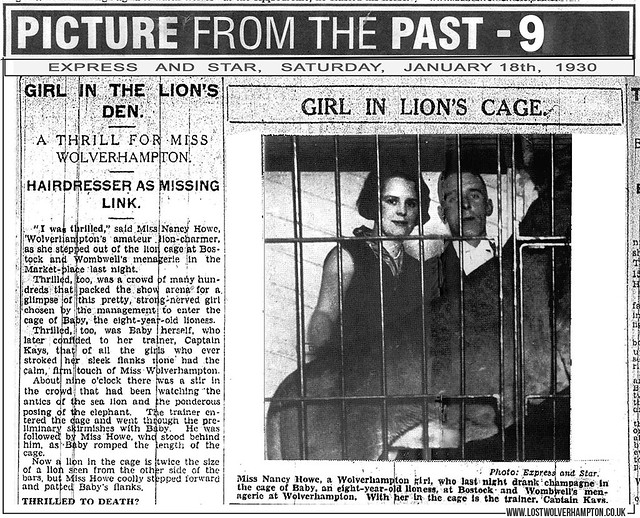 When my Aunt featured in the Lions Den at Bostock & Wombwells, Menagerie, in 1930 It was to be the last time this popular attraction would visit our town.

This lively sketch of the old Market Place, dated 1793, by artist Thomas Rowlandson, looking up High Green towards the church, is one of the earliest view of the town.

On one side is the old gabled half timbered corner house at the turning into Lichfield street stood T. Bevans Brandy shop.

Matching it on the other side of the Lich Gate is John Likleys wine and spirits store (later, in December 1818, will become the long established business of George Cope).

This stately Georgian brick building dated 1732 (is now occupied by the Nationwide).

The foreground shows the meat market or shambles with butchers working their stalls.

At that time there was an article in the Wolverhampton chronicle regarding the Market Place and the annual July fair – saying it was a round of pleasure for the inhabitants around the town It went on to say – The Market place (now queen Square ) was full of shows. Wombwells wild beast show occupied the principal place – Its wonderful picture of : lions, tigers, and Elephants draws thousands of visitors to the fair, and it is the prevailing custom for all classes- rich and poor alike – to take their children to see the Wild Beast show – for instruction and recreation.

Wombwell himself could be seen dressed in a scarlet cloak white hat, and top boots cracking his long whip as he stands in front of his show inviting the people to walk up and see the performing lions. and Wombwells brass band is said to be one of the marvels of the age.

Everyone crowded the market place in the evening to hear it.

By the turn of the century for some reason or another the Towns Fairs are now exiting crowds on the new market Place in Wulfruna Street.
This is of course is Pat Collins Fair which would visit Wolverhampton on many an occasion right up to the 1950’s.

And on this same spot just 20 years earlier on January 1930 another travelling show made headline news in the Express and Star. on the night my aunt Nancy booked in for a hairdo in Bostock s Jungle

Like many local young girls at that time Nancy was a factory girl and she and her sister found employment at the newly opened Goodyear Factory at Bushbury.

Here she is on the extreme right with the rest of the Tube-room girls at Goodyears , including, sister Eileen third from the right. and as you can see the Howes were all on the tall side even the girls

On the near left side were two hotels , “The Mitre” a Temperance Hotel and “Jessups” Hotel, with the original, narrow Mitre Fold in between them (all this little block will be gone in just ten years , the Civic hall will have arrive, Mitre Fold widened and a new Telephone Exchange built).

Now this daring deed dated – January 17th 1930 – on the towns market patch came about through a chance meeting between my grandfather, and the promotions manager for the circus.

It appeared that a menagerie was coming to Wolverhampton after a few days in Bilston and as It was their custom to get a local personality to enter the lions cage on the shows last night in town, they were looking for a volunteer, preferably a lady, who would receive a gold wristlet watch and a free hairdo for her trouble.

John Howe my grandfather happened to be in Jessup’s Hotel in North Street, when the promotions manager for the circus walked in. When John heard the promoters request for a local young lady, to feature in the show, and that the accepted volunteer would get a free hair do, and a gold watch for her bravery – he quickly jumped in.

As his daughter Nancy was just approaching her 21st birthday; he thought. A gold watch! What a nice birthday present and what a good excuse for a booze up so he quickly volunteered her for the event.

Well at almost 21 years of age – good looking, with a lively outgoing nature. Nancy wasn’t going to miss this opportunity to show off in front of her friends. So after the minimal protest, she really entered into the spirit of the occasion.

On the Friday night the arena was packed, including all of Jack’s friends from the markets and the many pub’s he used, and with Nancy’s many friends and admirers from Goodyears joining the curious Townspeople, the Marquee was filled to capacity.

Captain Kayes entered the cage and went through his routine with baby, the lioness, – who snarled and romped up and down the cage. Then Nancy came in and stood at the side of the trainer and when Baby stood still in front of her – she calmly stepped forward and patted her flanks.

Then champagne glasses were passed through the bars to the pair, and flourishing her glass toward her friends, Nancy drank the champagne. The crowds cheered and everyone awaited the arrival of the hairdresser to give Nancy her shingle trim, but unfortunately for some reason he or she failed to turn up.

So the pair left the cage, embraced on the steps outside the “danger zone,“ and the Showman presented Aunt Nancy with the gold wristlet watch.

..and after the show off they went. The lion for his supper. – Aunt Nancy, for a night on the town with her pals from Goodyears, and grandad John (the gentleman sporting the panama hat), to a party with his friends – at the Fox.

Reuben Whitehouse – the tall gent on the left , was the licensee at the Fox in North Street at one time does anyone recall any of these old time North Street residents.

In 1931 E. H. Bostock and his son Gus Bostock announced that, due to increasing costs, this year would be the Farewell Year of the travelling Bostock & Wombwell Menagerie.