In the early 1950’s, my  friend John Neave started as a student printer at the Wolverhampton School of Art; situated then, in the basement of the Art Gallery, under the supervision of John Mills a Liverpudlian – a  Letter press teacher.

John holds fond memories of a fellow teacher at the school then living with  his wife in  Codsall, who also hailed from Liverpool,  and who would frequently pop into the print department to chat to Mr Mills.

This fellow teacher was Norman Thelwell, who had joined him at the school to teach fine art . Thelwell was a popular cartoonist at that time and had many cartoons published in the magazines of the day.

Shortly before he came to  Wolverhampton he produced a weekly three-panel pantomime strip, ‘Chicko’ which ran in the first six issues of the Eagle before disappearing for a few months, before returning again in August 1950 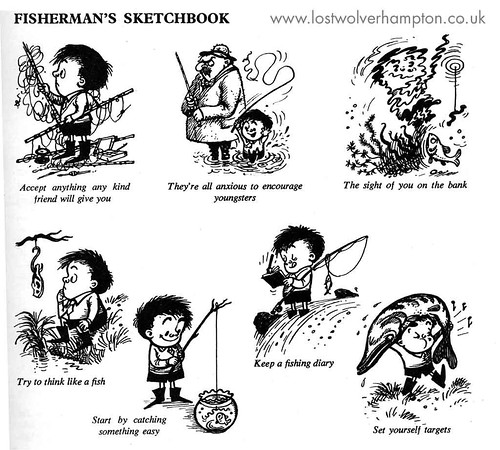 “So you want to go fishing”. Just one of his many cartoons and Illustrations  which must have been a useful supplement to his wages in those early days. they  appeared regularly until March 1962, by which time Thelwell’s work was widely known.

After John Left the Art College in the early 1950s his father helped him build a shed in the backyard of their house here in Gordon Street, where on an antique letter press machine John entered what was in those days in Wolverhampton the very competitive business of Printing.

And over the years he hasn’t forgotten Norman Thelwell the friend of his mentor at the Art School because if you visit John’s  house adjoining his workshop in Gordon Street today . There are still plenty of reminders of this prolific artist adorning the walls and shelves.

To view the fascinating life of this grand old Wolverhampton printer who has for over 60 years still continues to leave his mark on our town.

Please visit the following link to an article all about John Neave.