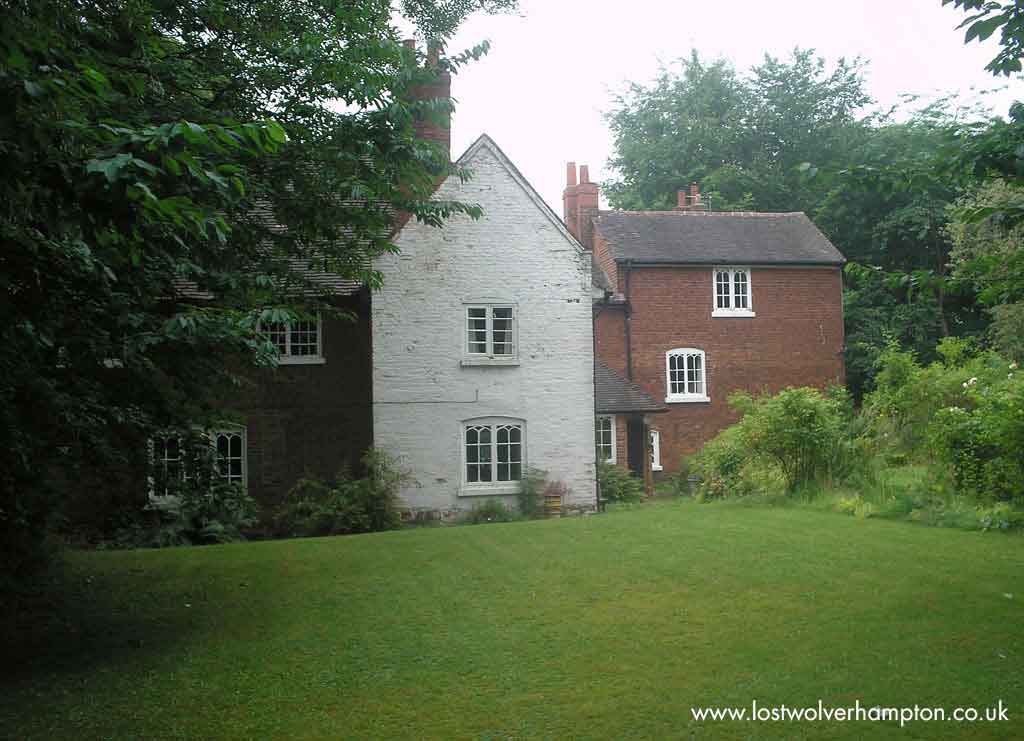 Any idea were this large house stands?

Approaching it from Lea Road in summer you would have no inkling of its presence, for huge beech trees and chestnuts obscure with their foliage its Strawberry Hill Gothic windows which from the  interior look out onto a snowfall of blossom and curving green lawn.

This ancient homestead remains, on of the last, and certainly the most beautiful interesting, remnants of early Tudor antiquity in the town.

Looking down from above todays Lea Road across the Royal School toward Penn Road, we see the little haven which is Graisley Old Hall nestled amongst the trees in the bottom right corner.
A wooden tablet inserted in one of the exposed wattle and daub walls is dated 1337 but this is not to be thought genuine. But even considering  its great age Graisley Hall in Penn fields is not a museum but a living home and such it has been since 1485.

Architecturally, it is clearly a house that has grown and developed over the centuries, with clear signs of windows having been filled in on certain elevations. The name Graseley (this being the older spelling) takes us back to the reign of Edward II (1284-1327).

Edward, who met a very grisly end in Berkley castle in Gloucestershire continued his fathers unsuccessful attempts to conquer the Scots when he succeeded to the throne in 1307. He was roundly defeated at Bannockburn in 1314 by Robert the Bruce. Records tell us that one Geoffrey de Graseley had to pay a subsidy to the King towards this ill-fated Scottish war.

So although the 1377 date may not be a true one, there was certainly a house of some sort owned by Geoffrey fifty years or even earlier.

Nothing is known of the builders or the first occupants of Graisley . The surviving records start in the 16th century when Wolverhamptons wealth was in its Wool. Nicholas Rydley, a Merchant of the Staple was in residence then.

Thence forward through the centuries of English History from the reign of the first, to that of the second Elizabeth the names of families occupying Graiseley can be traced. His son, Richard Rydley, died full of years in 1580, leaving by Margaret Leveson a son John Rydley, who married as a second wife Alice, daughter of Francis Craddock, M P and Recorder of Walsall, whose death is recorded in 1594.

The Jesson Family were established at Graiseley during the reign of Queen Anne (1702-1714) and it was they who took the building in hand and bricked in what had hitherto been  a timber framed dwelling. (The bricked up hall pictured in 1913).

The Jessons were prominent citizens – one Jesson was prebend of Wolverhampton and the name appears on the list of trustees of the free grammar School.

John the last member of the Jessons to live at Graisley was an opulent attorney who died a bachelor . His nephew Henry, Jesson surgeon,  of ‘The House that Jack Built’ which stood on the Compton-Road had rather hoped to inherit Graisley from his uncle ‘having attended him for many years as a surgeon for which he never gave me a farthing’.

Disappointed Henry left to live at Trysull Manor. (Source Trustees of Grammar School, Piggotts 1835 Directory) So the story goes the property was left to his other nephew James Perry Junior (1827 in Joseph Smarts Directory ) who, in turn left it to his brother Thomas. and when he died In 1850 it passed on to his nephew William Herrick.

As the 1800s turned in to the 1900s, we find that in 1905 the large estate of H.W.Owen Esq (desceased) including the hall is up for sale.
We find it’s in the tenure of Thomas Mott Whitehouse esq, on an annual tenancy, together with the comfortable cottage residence adjoining underlet to Mr Bolton.

One of the agreements on the sale notice states:

“Should the purchaser of lot 1  at any time construct Carlton Road to a junction with Penn Road The trustees of the Wolverhampton Royal Orphanage are not to be called upon for any contribution to the cost of construction of that road taken over by the Corporation.”

As we see today this clause was never called upon.

Whether or not he was the next owner of the hall I am not sure  but in 1911, major restoration work was done to the interior of the hall, by George Green owner then, who was the borough surveyor, he did the work sympathetically, using old timbers, some dating back to 1698 from St Peters Church belfry.”

On the 23rd December 1930, the site was purchased for £4.250, by the Royal Wolverhampton School, for use as an administrative and storage building. This included the hall, Cottage and site for Junior School.

Up to 1957 the hall had no official recognition It was only then after a visit by Mr Enoch Powell who brought it to the attention of the Minister of housing  His timely intervention meant Graiseley Old Hall became a Grade II listed building.

At the time of Mr Powells visit, Flora Forster was living at the hall. She had gathered around her a group of Oxford University friends having ‘country house weekends’ with her. These included Dorothy L. Sayers, Margaret Kennedy and Vera Brittain. (Check on the internet for the history of these influential People)

In the 1990s the house was purchased by Sue Williams a actress by profession and her Husband who fell in love with Wolverhampton, and the hall, all this  after they had met through Sue’s involement at the Grand Theatre (but that’s another story).

Sue now has a passion for her home which she enjoys sharing with others.