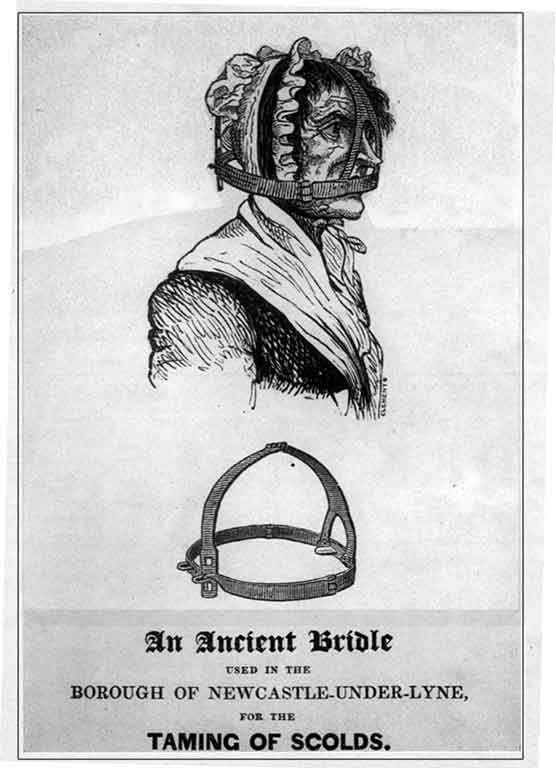 The terrible  treatment of the weaker sex across the World at the moment, which I abhor, is brought to us graphically every day through the news and media.

Regarding this, the lines and title in this  my latest post may seem a bit derogatory. I can assure you this is in no way intended.

This little story is actual fact and shows that we here in Wolverhampton haven’t always been the gentlemen we think we are.

The Brank was an instrument employed by our forefathers in the punishment of ladies guilty of the crime of “scolding” and disturbing the public and domestic peace.

It is referred to in many of the oldest church registers in the kingdom (dating from 1535), items of expenditure in connection with it being entered in the churchwardens accounts .

In “A Short Account of the City of Lichfield” published in 1819, we have the following reference to the bridle; “the bridle heretofore used as a punishment for scolding women, who have undergone the punishment of the duck-stool, without reformation, were compelled to wear the bridle, which consisted of a hoop of iron surrounding the neck, from which rose an arch, with a plate which entered the mouth and so compressed the tongue that the veriest scold would find it impossible to utter a word intelligibly.”

Willenhall in medieval times had its scold’s bridle. Just over a  century ago it was in the possession of John Harper J.P. of Brueton House, Bilston. It was not unlike the skeleton of an old watchman’s lanthorn. It opened on a pair of hinges, and a plate projecting inwards formed the bar to that freedom of speech, for the abuse of which the scold had to suffer.

The scold’s bridle in Wolverhampton was kept in the Old Town House, on the High Green, along with the stocks, the pillory, and the other instruments of punishment so familiar to our forefathers of four of five generations ago.

The offending woman would be led to the centre of the market place, where a police constable proclaimed to the assembled onlookers her name and offence, and the period of time she must remain “silenced”  unless she gave tokens of repentance. Generally a few hours effected a temporary cure; but if she remained refractory until night she was put into the crib, a meal of bread and water given to her, the bridle being moved for the night-and next day the punishment was renewed by exposing her in the bridle to the derision of the bystanders.

A bridle, bearing the inscription – “Garrula lingua nocet,”  which is interpreted, “A scolding tongue does harm.” says the editor of “Stafford in Olden Times,” is now to be seen in the Wragge Museum.