OUR PAST IS ALL  AROUND US.

It has been said many times Heritage is not just something on display in museums or town archives. Here again in Wolverhampton everything that surrounds us in our everyday lives, every street, supermarket, football ground, university and park, even the land your house is built on Is a reminder of something else that was there in the past.

Pipers Row this place was called. – No sign now of that  terraced row, – Just  the new  Bus Station and County Court, that’s all that stands there now.

This extract from the  first detailed map of  the township Wolverhampton  made by Isaac Taylor in 1750,  clearly shows a certain London  Row as a major route into town from Bilston

The map also shows at that time there had been much recent development on the south west of town in Lower Berry Street , London Row,  Bilston Street and Manor Lane were 784 people lived in 114 houses. – By 1760 London Row had become “Pipers Row”

All the buildings seen here on this photograph, apart from the Clarence Hotel (Now Wulfrun Hotel)  on the corner of Queen Street have now gone to be replaced by our new Bus Station.

The majority of the buildings are now looking decidedly run down , some of which  have stood the test of time for  some two centuries, certainly the two alehouses “The Little Swan, and “The Barley Mow”

Pictured in the 1970’s,  this once prosperous row of town houses are on the tail end of their existence  providing now for a mixed ragbag of retail shops at low rents.

But age old  Pipers Row holds many secrets of a fascinating past. even as early as 1793 one of its many hostelry’s the “Barley Mow” made headline  news. 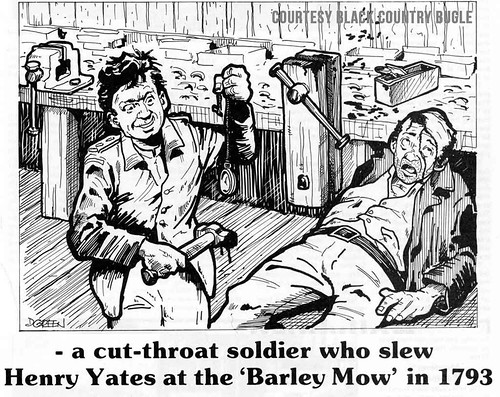 Henry Hughes the landlord of the “Barley Mow” a quiet respectable man who, whilst not engaged in his alehouse, plied his trade as a carpenter in a small workshop at the rear. of his premises.

Early in 1793 he made the acquaintance of a young Yorkshire soldier Ebenezer Colston. billeted in town who had called in at the Barley Mow for a jug of best ale.

Unbeknown to Henry Hughes young Ebeneezer had a bit of a reputation, apparently he lacked discipline and wasn’t particularly fond of hard work, he mostly  enjoyed drinking and womanising in the many taverns in town.

After discovering the soldier once had an apprenticeship with a carpenter in his birthplace in Beverley.  Mr Yates offered the young man a little extra beer money  helping him in his workshop during his spare hours. Colston immediately jumped at the chance, and over the subsequent weeks spent much time in Mr Yate’s unofficial employ.

But events took a tragic twist when on the morning of Saturday April 1st 1793, Mr Yates was discovered by his wife lying lifeless, amongst  sawdust and wood shavings  at the back of the workshop,

The crime seemed to be practically motiveless as all that was missing from his person was a watch,  a prize even in those far off days only the most senseless criminal would be prepared to kill for; but  senseless ,was what Ebeneezer Colston turned out to be. As he was found that same day in another public house close by, with blood on his tunic and a watch and chain in his pocket.

After a short stay in the house of Correction at Wolverhampton he was taken to Stafford Jail and at his trial on 2nd August 1793, he was found guilty of wilful murder and was duly taken to the fateful tree where the last rites were read, a rope fixed around his neck and he was swiftly launched into eternity.

There closed just one  early chapter from the book of past times in “Pipers Row “.

I was born in 1910 at the  old fashioned pub that was the “Barley Mow “in Pipers Row. with sawdust laden bar and a smoke room with upholstered seats on the walls around a snug fire, upstairs was a  club room, never used as such.

Outside was a large yard with a cosy stable capable of housing three horses. and opposite was an open building with a manger along the wall and hay containers at intervals above.

In this building we stored trucks and handcarts used by some pub customers at the High Level station close by were they assembled to meet the incoming trains and trundle  goods for sale around town with travelling salesmen. Every Sunday morning the bar counter would be piled with   bread, cheese and Spanish onion, free to all customers.

Pipers Row at that time was a very busy and noisy thoroughfare.  Herds of cows and flocks of sheep were driven periodically along the street to the slaughter house and cattle market around the corner,in Bilston Street,  and trams rattled by throughout the day.

There were many callers to the pub including the salt women from the Railway Yard, doughty females in  hessian aprons with large blocks of salt on trucks which they sawed into small bricks and sold.

Another was the Oyster Man straw hatted  in an immaculate white apron , carrying a basket which became a table on which he spread a cloth and served oysters . The Hurdy – gurdy man was also a popular visitor  to the pub and his weekly visits  were well attended.

The street was entirely self sufficient with all variety’s of retail shops and cook shops, a near one had  Dickensian type high booths .

A  most  memorable occasion for me was on a November morning. in 1918, Schools were closed during the influenza epidemic and I stood  at the junction of Pipers Row and Queen Street . When the Express and Star fire alarm sounded . This was the sign the Armistice had been signed.  The First World War was over

There are many stories of “Lost Wolverhampton” these were  just two of them!