OUR PAST IS ALL AROUND US

It has been said many times Heritage is not just something on display in museums or town archives.

Here in Wolverhampton everything that surrounds us in our everyday lives, every street, supermarket, football ground, university and park, even the land your house is built on Is a reminder of something else that was there in the past. 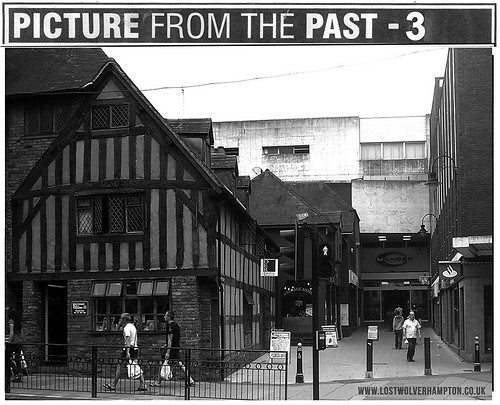 Even this modern entrance to the Mander Centre from Victoria Street holds many clues to the history of our town and is people. These modern buildings seen here today in 2014, were built directely on the site of our 16th century Grammar School. 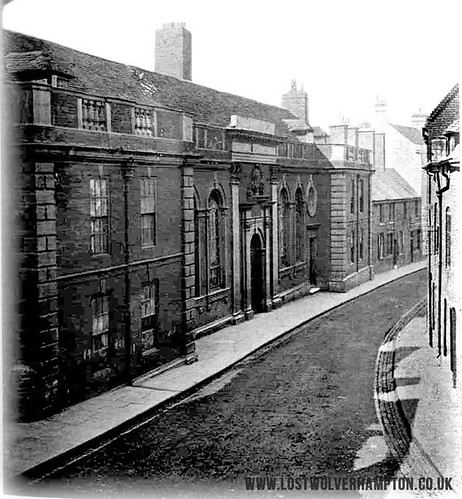 On the  Map showing Wolverhampton by Isaac Taylor in 1750, is a lithograph of the front of (the) School. The school in question is the free School founded by Stephen Jenyns, born here, and   Lord Mayor of London  in 1509.

This is the  Free Grammar School (seen here in Johns lane), pictured here about 1871.

It was said it had one of the finest classical facades in town, but that didn’t stop it being ruthlessly demolished in 1964 during the building of  the Mander Centre.it  was erected in the early years of George I’s reign. It consisted of a central school room or hall flanked by projecting wings which provided a house for the headmaster and one for his assistant, the usher.

These old school premises were made redundant in April 1875, and the grammar school moved to its present quarters on the Compton Road. Then in 1879  Messrs John Steen & Company established their Press in the vacant school buildings.  At the end of the last war Still occupied the main hall but both the two wing buildings were being used by the retail trade. 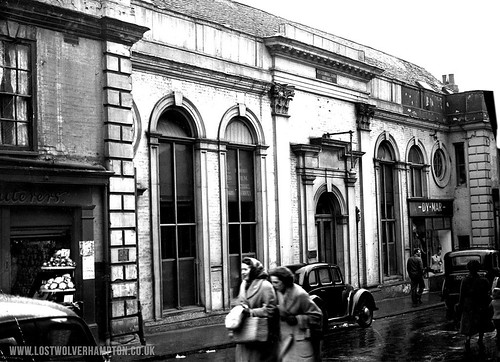 Don Lewis, made a name for himself during the war as a Sergeant Major, in the Eighth Army (The Desert Rats).

When he was demobbed he went into the insurance business, he came into the Wholesale Market around 1949-50, as a salesman for Samuel Hyde Potato merchant.

Although Dons knowledge of the retail trade was practically nil, he was a likable sort of man with an eye for business. He noticed at that time when fruit was becoming more plentiful from abroad and rationing was coming to an end, the main players in the fruit and veg  trade were either in the retail market, or on the patch outside and as these pitches were at a premium with no chance of acquiring one he began to look elsewhere.

He was looking for a good prominent town centre position and he found it, in, what was once the Bursaar’s house adjoining the Old Grammar School in St John Street an ideal spot just below the entrance to the Central Arcade,  It was at that time called “Vegseeds”.

By 1956 this shop was probably the busiest and most profitable fruiterer’s in Wolverhampton, away from the market, employing a manager and many serving staff of mainly young girls. 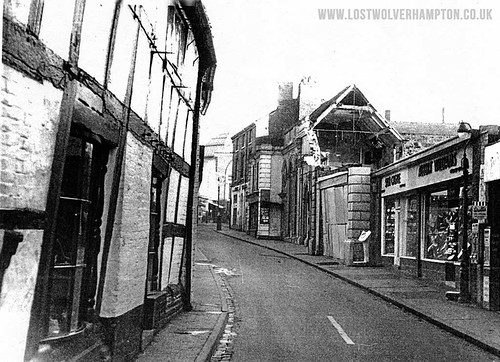 Circa 1964 and the bulldozers move in to St John’s Street.

During the 1960’s and 70’s the Mander Centre came about, which caused the demolition  of all of St John’s Street – with the exception of the old “Copper Kettle”, later “Lindy Lou”) seen here on the left corner in its old white garb.

Unfortunately for our heritage this demolition didn’t spare  the Old Grammar School.

But Don Lewis was full of enthusiasm of this new project and when the time came for the shop to close in St John’s Street. he moved his business just 200yds into a shop recently vacated by Rosenshines, in the old Central Arcade,  this was 1963.  as a temporary measure until the centre was completed.

An ideal Pitch came available in the partly finished new centre on the ground floor next door to Marsh & Baxters (Now Smiths’) with Farmers Fold entrance in between them.

This shop became  a goldmine, and for the next 10 years it was arguably the busiest fruit and veg shop in Wolverhampton and including part timers on a Saturday it employed 21 staff, Don treated his staff very well and they worked their hearts out for him.

But as with everything in life, things cannot last and through one thing and another  Don decided to leave the centre, eventually opening up a new out of town enterprise  at Merry Hill, Wolverhampton.