My Mothers family were the Worrall’s and the Stevens.

I want to share a few episodes of their life and times with you , see as they saw, and bear with them in their sorrows and happiness in Horseley Fields.

Three years after the battle of Waterloo my forebears were building boats in Walsall Road, In Wolverhampton. As far away from the coast as you can get.

Do you get the picture? 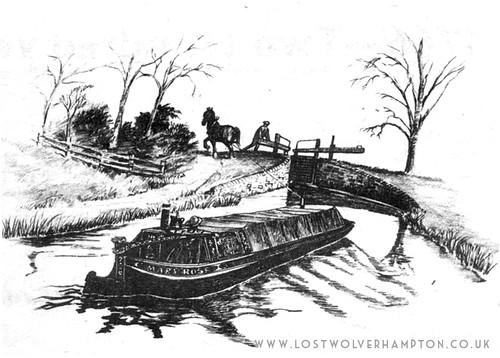 The introduction of man made waterways added a new vista to certain Midland townscapes in the latter part of the eighteenth century, and Wolverhampton was no exception.

If you notice Isaac Taylor’s Map of 1750, The area between Coal Pit Road (Horseley Field) and Manor Lane (Walsall Street) down to their junction with Willenhall Road was just green fields.

But by 1770 as the canal network snaked through Monmore Green, from Birmingham on its way to link up with the Staffs Worcester Canal at Autherly. It caused an upsurge in  industrial activity along the mile long stretch between Bilston Road and Broad Street basin.

In the Staffordshire General & Commercial Directory for 1818, it lists for the first time three local industries two of which became local legends the other nowadays concerns only  me.

In Pigot & Company’s, Commercial Directory 1835 – he is shown as a boatbuilder,  Walsall Street; and in Kelly’s Directory  of  1850,  fifteen years later, he his still listed as a boat builder in Walsall Street, and has now been Joined by his son William Worrall in the same trade.

A few years later William Worrall retired. He left the licensed trade and  lived long enough to see the Shrubbery Inn  change its name to The Viaduct  to compliment the huge structure looming over Walsall Street, brought about by the arrival of the  the Railways into town.

Thirty years later we see William Worrall’s eldest son born in 1844, William Henry Worrall, my great grandfather, is noted on the British census – dated 1881, as residing at Court 2, Ward Street, Wolverhampton.  He is married to Julia May Wood, daughter of John Wood, an Ironworks manager from Bilston, my  grandmother Julia Worrall, ten months old at the time was one of their eventual five children.

By the end of the last war canal transport was on a steady decline and the many wharfs  and basins were disused, filled in, and built over.

Off to the right the  local greengrocers on the corner of Corser Street advertises the alternative to tinned Salmon, Skippers. (The posh name for Sardines).

To the left of the three shops the gentleman is passing a wall situated on the east side of  the Great Western Railway tunnel that passed under Walsall Street, then under Horseley Fields, the canal, emerging at the Low Level Station.

The two policemen with their bicycles on the left of the bridge stand on what was once, the openings from Walsall Street into  Wood Street and  Cannon Street,  whilst beyond the Viaduct, and the canal bridge and  Commercial Road was the entrances to Shrubbery Street and the former memorable, Shrubbery Iron Works, seen here now In 1942, occupied by various local works.

2014 this same view of Lower Walsall Street, again; looking up from the junction with Horseley Fields,is still recognisable today mainly because of the old Stour Valley line railway Viaduct, which carries the mainline from the High Level Station to all points south bound.

Today nearly the entire length left hand side of the street going well back toward Bilston Road, which once contained the many canal wharves and basins  are now covered by The British Oxygen Company Works.

This brief historic survey of  Horseley Fields , with a few episodes from the life of my Mothers forebear’s continues.