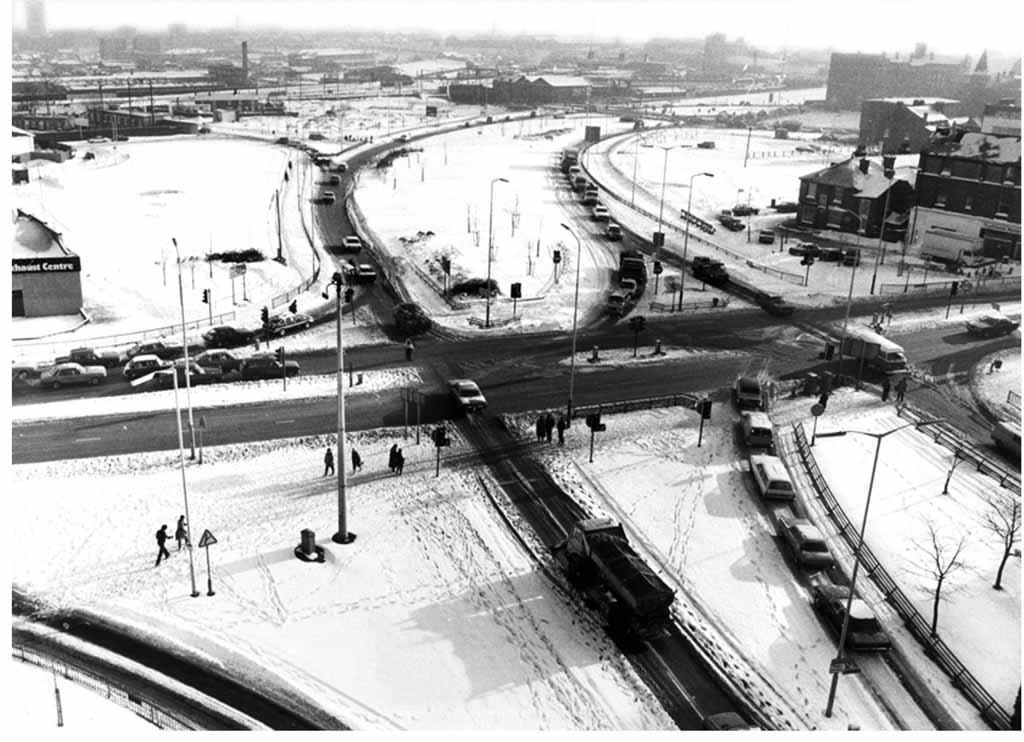 A fresco; which now has unfortunately been lost to the public eye. Was once on the south side of the Chancel of St Peter’s Collegiate Church, representing ‘The Lost Piece of Money’ and it commemorated the building and the endowment of St Mary’s Church thus – “Give God the glory for the will and the means granted to Theodosia Hinkes to found St Mary’s Church, Wolverhampton, with Vicarage and Schools – A.D. 1842.”

For those intrepid car traveler’s of today who use the Wolverhampton Ring Road, if on occasion you approach its busy junction with Stafford Street, and the lights are against you, as you sit and fidget, eyes on the lights, engine revving; well after today, relax, sit back and think on this.

Whether you know it or not you are about to cross this mediaeval area once known as the ‘Four Ashes’ and the Ghosts of St Mary’s guard this entrance to the fast lane.

The ‘Four Ashes’ was a small quiet area of Stafford Street, and is to be seen on Isaac Taylors map of 1750. (It is noted on my later 1950’s drawing as the area around the top of Charles Street).

Now as we enter the nineteenth century with the arrival of the Canals and Railways, coupled with the influx of immigrants from Ireland, the environment in this area of town changed for the worst.

We find St Mary’s Church (consecrated October 15th 1842), has been built to provide a little haven of peace amidst the turmoil around Stafford Street, which by now, fronted the mainly Irish quarter of town with its maze of courts and alleys around ‘Littles Lane’ and the canal, known as the ‘Notorious Carribee Islands’.

Now if we fast forward now to the 1950’s we see a memorial to this historic spot in the form of a licensed house with the same title. The ‘Four Ashes’ was a William Butlers House, then in the capable hands of a widow; Francis Pearce. Here the pub is pictured at the top of Charles Street.

Across Stafford Street, directly opposite on the corner of Faulkland Crescent, was ‘Attwoods Garage’ (where Kwickfit is today). On the opposite corner of Charles Street to the pub stood ‘Brodies’ chemists, and Corkindales; a mens tailors.

When this picture was taken, the Church of St Mary’s (on the left) was already redundant.

The remodeling of this area between Faulkand Street and Littles Lane began in the latter part of the 1940’s, with the closing of the Vicarage and Schools, and with the deconsecrating of the Church. The buildings themselves had a further 10 years of life, used as facilities for the Young Mens Christian Association.

Littles Lane (on the far left) was not a quiet backwater, as it’s name suggests, it was a very busy carriageway which lead down to the Great Western Railway goods yard and Broad street canal basin, with many houses, pubs and works in the intersecting streets.

On the left, the towering block containing ‘Copes Motorcycle Dealers’, on the right across the road was ‘E.L Bouts Garage’, which would soon re-move to Merridale Lane. On the corner opposite ‘Copes’, was the former ‘St Mary’s School’, now being used as the Y.M.C.A. canteen, which was very busy with local trade and staff from the buses terminating at the top of ‘Stafford Street’.

The Church building itself was partially demolished around 1950, a portion of the fabric was kept and adopted to form the new headquarters for Wolverhampton Y.M.C.A.

Now re-structured it has taken on a new mantle, and re-named ‘The Percy Thomas Hall’ by its benefactor. For a few short years it would be a local dance hall, with its resident bandleader, Jack Andrews.

It wasn’t always strictly ballroom at the Y.M., Jack wasn’t adverse to a bit of the new craze of Rock and Roll.

Next door, the vicarage was for awhile, a popular boys club, formerly the home of the ‘Toc H’. All types of youthful activities were enjoyed there.

Apart from the film shows, there was snooker and table tennis facilities, on hand, and many crack players of both sports represented the Y.M. in the local leagues during the fifteen years following, before the buildings demise.

A pile of rubble is all that remains today on tuesday 17th October 1950, of this once famous Stafford Street landmark consecrated in 1842 made redundant in 1949.

According to ‘Hindes Red Book’ of 1894 – 5, “the style of architecture was intended to be a revival of that prevailing during the 13th and 14th centuries. The church is cruciform, surmounted at the intersection by a tower and spire, the latter, which is of a shape common in Normandy and other parts of the continent, terminating with an encircled cross.”

This Christmas scene was taken, from the top floor of Wolverhampton’s Faculty of Art Building, at the Stafford Street junction of the ring road in January 1982.

The bells of St Mary’s had not been heard for over thirty years, and the drink had long run dry at the pub opposite when this treacherous carpet of snow brought to an end my minds journey of life around St Marys, but still the ghostly memories of the ‘Four Ashes’ linger on!