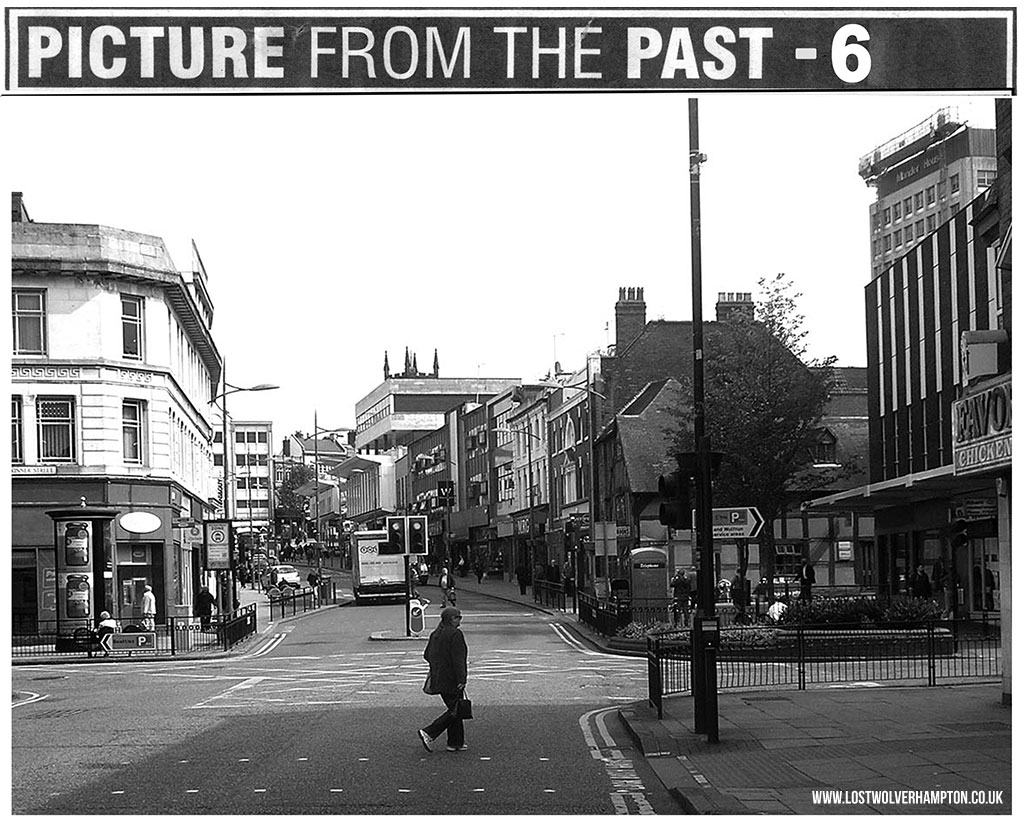 It has been said many times Heritage is not just something on display in museums or town archives. Here again in Wolverhampton on most streets that  that surround us in our everyday lives,  you will probably find  a building or business  to remind us  of something else that was there in the past.

Victoria Street , seen cluttered and shuttered in 2014 , though boasting little of  the architectural distinction it once had,  still retains  one medieaval building  to recall its illustrious past. The former Copper Kettle. Now if this building could talk what a tale it could tell of past times seen in this Royal Street.

Three hundred and fifty years and more have  now passed, since Charles the first  took refuge for a nights lodgings in the house owned by the Gough family, on a site in Tunwall Street, where the Star and Garter would later stand.

One hundred and seventy seven years have passed since 1837, when the first railway train arrived at Wednesfield Heath , the new station for Wolverhampton.

The  connection to the station at that time  from the town centre, was by  way of  Horse drawn Omnibus departing from the new hotel, recently opened in Cock Street.. The new hotel in question, was Star and Garter,.

Paul Law,  at that time the proprietor of  The “Star & Garter,” had also taken over the management of new “Station Hotel” at Heath Town, and he ran buses  between these two hotels and this continued  until the opening of the High Level station in the town centre, in 1852.

BIG CHANGES ON THE STREET

Cock Street was named after the the Cock Inn, the  largest and most famous of Wolverhampton’s Inn’s from memedieval times.

Then after  Queen Victoria’s  visit in 1866, in her honour it was renamed Victoria Street and it took  on the important retail mantle it maintains today.

All this  came about with  the help of visionary people, such as the Mander family  who lived and started the business empire there at the time of Isaac Taylors Map and perhaps another gentleman  who arrived in town in 1862  from Shrewsbury, who on his  arrival   sent his 10 year old son to  William Hutchinson’s private school in Temple st.  and this young man on his way to and from school  would pass up and down Cock Street many time a day.

He must have been a shrewd  lad, with an eye for business. for even then  he noticed  the potential of  Cock Street as a prime site for a future mercantile enterprise and  in 1877 , at the age of 25 , he opened the Victorian Drapery and Supply stores,  later to be known as James Beattie.

The oldest property in the street the “Hand  Inn”, as it was known  at the time of Charles’s  visit,  was in the 1940s and 50s known as the Copper Kettle, a bakery and tea shop in the ownership of the Hughes  family,  bakers and confectioners.

In the mid 1950’s Harry Hughes re-styled it as a  Baby Care business and re-named it “Lindy Lou’s”.

He later retired and sold the building  and after   restoration  by the Council, in 1980-81 it has housed  numerous tenants , and today it is a nostalgic bookshop  on the corner  of whats left of John’s Lane ,  the Victoria Street entrance, to the Mander Centre.

Nothing restrained about Victoria Street seen here in 1910. the shopkeepers of the day are determined that every passer by should know who they are and what they sell.

John Cavitt & Sons on the left in the tudor-styled building spreads the news across their ornate facade that they are the towns “Complete Furnishers”.

But this will be short-lived as this building will eventually a few years later become the home of F.  W.  Woolworth,s venture in to Wolverhampton, with his 3d and 6d stores. His larger store opened in Dudley Street in 1925.

On the right the bowler hatted portly gent passing the corner bakers shop  of Mr J.W.Hughes can’t help but notice the two prominent signs above his head belonging to  Mr Horace George the tailor crying out that these are  his  Victorian Street  premises seen here, in 1910.

But then again soon Mr George himself will re-locate his business around the corner into John’s Lane and the future prolific town grocer George Mason will then occupy this fine Georgian building for quite a number of years.

Finally I can’t leave this evocative scene without mentioning the Empire Theatre, built in 1898 pictured at the top of the street in Queen Square which at that time was the most ornate building in town. and the three ancient hostelries on the west side “The Hand & Bottle”, The Giffard Arms” and the “Spread Eagle” all of which were there at the turn of the 18th Century.

Again  at the top of the street on the right the gabled frontage of the towns principal hotel the unforgettable “Star and Garter”.

The same view of Victoria Street  looking towards Queen Square forty five years on and two World Wars have come and gone.

On this photograph you will notice all the West side of the street has been rebuilt in the late 1920’s,  but on the opposite East side the buildings.

themselves are similarly unchanged in appearance  four decades on

You could say  though the shop fronts here now have a more brazen appearance than the  earlier photo suggested.

The Hippodrome theatre, having  replaced The Empire in 1922  faces  again down Victoria Street from  Queen’s Square ,   The Queen’s Arcade,  built  in 1910  compliments   the Star and Garter next to it  at the top of Victoria Street, and this is how the Street is best remembered, by older Wulfrunians,  before the advent of the Mander Centre a decade later.

I will take a walk up  this impressive line of bustling shops of my youth that once supplied all household daily needs, and by mentioning  the names of the shops and premises as I recall them it may stir the memories of  old  Wulfrunians, who remember them or evoke  the imagination of those who do not.

On the West side

Dominating  the corner of Skinner Street-Victoria Street, was ‘Bradburys’ ladies outfitters, and the morris pick-up is parked next door, to close really to the zebra crossing, stands outside the S.M.C. shirt-makers.

Besides little Woolworths and Murdoch’s radio and record stores, there were a couple of other shops, with offices above, then the Giffard Arms, Hudsons, leather goods, James Beattie and finally Burton’s, on the top left facing in the Square.

On the East side

On the opposite side of the street  Don Everall’s Booking office takes up corner position, at the bottom of Bell Street,  then Dave Miller the jeweller with  the “New Hotel” the old coaching house on the corner of John’s Lane,  at that time owned by  Banks’s Brewery.

Across on the opposite corner of John’s Lane undergoing some changes but still standing proud at No. 19, is the  old “Copper Kettle,” Harry Hughes has  just opened a baby care business in the front of the shop, renaming  it  ‘Lindy Lou’s’.

Next door at No.s, 18a and 18b, in the   former double fronted Georgian residence, is  a branch of George Mason grocers, some might recall this building  in the 1980s, as the Wolverhampton branch of  Dan Price’s    Bicycle Store’s.

Then,  at No’s 18 and 17 respectively were Yarnolds drapers, and  ‘Halfords’  Cycle Store.

At that time between  Yarnolds and Halfords  was a  door, which led to the ‘Regent’ a high class restaurant, which  was situated above these two shops.

J & W Poveys confectioners  and cafe came next, on the entrance to Farmers Fold- the small alley leading back into the other half of Johns lane.

On the  other side of the alley,  taking up No’s 11/15 was a multi- purpose store on three levels belonging to ‘Bedford Williams’, it was deemed to be (The poor mans Beatties). and next door at No. 10, was the rubber goods store of Chas Hunter’.

Adjoining Hunter’s  with the removal van parked outside,  was Smarts Furnishers at No.9,  and finally,  the “Star and Garter” next to the splendid  “Queen’s Arcade” and Queen Square.’

I am sure there is no one who would disagree this photograph shows Victoria Street at its best!

So here we are again and some twenty years have passed. On the corner of Skinner Street we notice Derek Dougan the local Wolves celebrity is about to open  a new enterprise in the former Bradbury’s building.

Barratts of Feckenham have now taken over the premises that for many years were once the smaller town branch of F.W.Woolworths, and  apart from James Beattie, Hudsons and Burtons, all the former tradesmen have now been replaced by different outlets.

On the opposite side of the street with the Bell Street corner demolished and modernised to form part of the Mander Centre, we now have a much better view of “Lindy Lou” which is about to be restructured.

The Georgian buildings from Lindy Lou to Farmers fold, although now more garish in appearance are  still there and  only two business’s that have survived the transition from the 1950’s , are Yarnolds and Chas Hunters.

We could have perhaps forgiven the powers to be for the the New Precinct ( Mander Centre), which undermined  the top frontages of our Royal Street, if only they  had , had the good sense  to retain the “Star and Garter” and the “Queen Arcade “as the entrances to their grandiose scheme  Instead of the Lego Styled architectural ones  we have today.

But what chance was there of that.!

When you see peering down from Queen Square  here in 1979,  not our famous Music Hall building, whose original Victorian frontage could have been saved,  but the square nondescript concrete structure  built for the Times Furnishing Company, in 1959, a few years before the Mander Centre, was started.