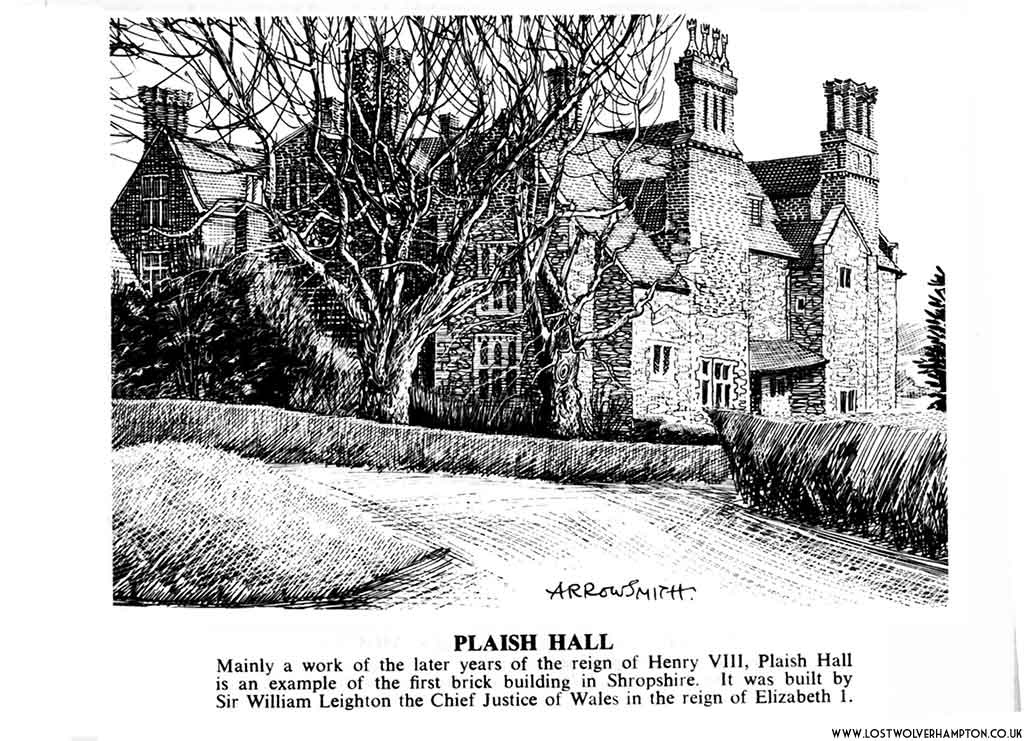 A STORY FOR HALLOWEEN

There is an old house lying peacefully in the heart of shropshire, a beautiful Elizabethan building with unusual chimney stacks. It is to these chimney stacks a curious and eerie story is told.

This is a true account regarding her visits to this Medieval Hall by the Dowager Lady Mander circa 1940’s published  in the Mander Bros  works journal.

As a young girl I was invited by some friends to come and stay for a Hunt ball. They had recently moved from the West country and bought a lovely old place in Shropshire, built in Elizabethan style with a great hall in the centre, and two wings either side, each approached by a spiral staircase- in one wing the visitors rooms, and in the other those of the owners.

I was shown into a large room leading out of a dressing room which, in its turn, opened of the Minstrels Gallery. The walls were papered with a design of peacocks’ feathers-dark, and I thought somewhat sinister in conjunction with the dark oak panelling below it. One girl arrived at the same time as myself- a girl who lived nearby. The rest of the house party were to come next day.

I must now say that I have never been in the least “fearful” or nervous at night, rather the reverse, yet in this room I had a terrible feeling of fear, so much so that I dare not let myself be left in the dark and managed to keep the fire in all night by throwing fresh logs on as soon as it got low.

I could not say of what I was afraid, but I felt strongly that I was not alone in the room. When bedtime came the next night I knew I dare not pass another night in this fearful room, so I asked the other girl if I might share her double room – a thing I hate to do, especially with a stranger, but anything was preferable to remaining alone in my own room.

On joining her I asked if I should open the window a little- they were, of course, small leaded casement ones. Somewhat to my surprise , on pulling back the curtain I noticed a stout rope hanging down. Obviously, I thought, the chimneys above must be under repair, but why leave a rope dangling?

I turned to my room mate and told her about this ; she received the news with a look of horror which astonished me, and she preceded to tell me the story of the house which, being a local girl, she knew well.

The original house she said;  was built of stone, but Its new  owner, the powerful Judge Leighton, the Chief Justice of Wales wanted it rebuilt in brick.

Judge Leighton had lived in this house in Charles II’s day. and it was said he and Judge Jeffries were  both been called “The Hanging Judges,” for they condemned so many people to be hanged .

A local builder was amongst those condemned by Leighton, at that time. The poor man had come to the judge and asked to be pardoned. The Judge promised him that if he would build him the finest set of chimneys he had ever yet built he would spare his life.

This the man did and the beautiful chimneys are there to this day.

But after completing the job the Judge ordered the wretched mans’ eyes to be put out, and for him to be hanged from them self same chimneys and the tale goes that one can see the rope with which he was hanged .

Now I had never heard the tale before and knew nothing of the history of the house, and being  sceptical I thought this is  “Nonsense, of course it is only the effect of the lights within the room throwing shadows on to the darkness outside.” I moved the curtains back and forth; all the shafts of light moved and shifted, but the rope remained, clear and straight; we both saw it.

“Then,” said I, “I must open the window and stretch out my hand and try to touch the rope to prove that there is nothing there, for I cannot sleep with that ghostly thing out there.”

This my room-mate discouraged me from doing however, by saying that a clammy hand might clutch mine. I felt so terrified then, that I fastened the windows and drew the curtains.

I mentioned this to the other guests and that evening they all insisted on coming up to see my famous rope; of course none saw anything that time.

I spent the third night in my own room alone once more; during which time I always I felt there was someone just over my shoulder- I saw nothing, only felt this presence.

Well after this hardly pleasurable weekend I was not altogether sorry to return home.

A few years later I paid another visit to this house on this occasion with my husband. Our hostess, who was slightly unwell and in her room, died suddenly and very unexpectedly whilst the rest of us were at breakfast. This happened just before the first world war; our host, who was quite inconsolable, rejoined his regiment and was killed shortly after leaving the property to a nephew.

This young man spent most of his time abroad, and during one of his absences I took an American friend over to see the house; we were shown over it by the gardener’s daughter.

When we entered the room I slept in, she told us that during her young master’s last visit, he brought  a Professor friend to stay and had put him in this room, but after one night there the Professor had asked to be given another room, “for,” said he, “I can get no rest here, a little old man walks up and down and gives me no peace.”

How glad I am I never saw the old man but only felt his presence.

In a very short while the nephew met his death in a bad car crash. The house was then sold by his trustees. I have tried to keep in touch with the happenings since then. The house has changed hands several times since the death of my friends.

Bad luck in some form or other always seems to mar the lives of the people who live there. I heard that one owner had called in a priest to lay the ghost, and I sincerely hope that fear and evil has departed.

If you read this and fancy a visit Please respect the fact that this today in 2014 is a private house.