When market trading in fruit and vegetables was in its prime. 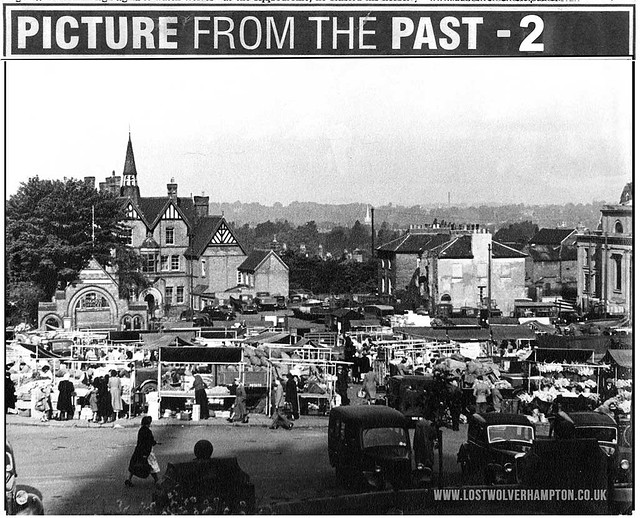 Looking to the west from the terrace of St Peter’s Church with the greenery of the West Park in the background, we see in the foreground in all its olde world splendour, the old market patch, Wolverhampton pictured in the mid 1950’s

Although its still early morning we see the Flower sellers stalls to the right, already  decked out with seasonal blooms and we note the loaded lorries at the rear of the family owned fruit and veg stalls   recently arrived from across the Wholesale Market in Wulfruna Street close by.

I could name many of these hard working stallholders most of them up before the crack of dawn to buy and lay-out their stalls in readiness for the days trading.

I can honestly say, I think myself most fortunate to have grown up close by here off North Street, and seen these markets indoor and here on the patch in their prime, on their original 20th century site, full of atmosphere and pageantry.

Stalls past down through generations of the same families selling every variety of household needs., the likes of which we don’t see so much of today. and perhaps will see even less of in the future.

But its that majestic 19th century building that dominates the background on this picture that I would like to bring to your attention.

If you look through the ornate Lich Gate you can see its present days title “The Education Offices”. which came to be in the early 1920’s

The earliest recollection I have  was during the War when a large concrete water tank was built in its lovely gardens . Then later during my school days it also coupled as a school clinic, were cuts and bruises would be treated ,and teeth would be regularly checked and attended to . A painful experience as I recall.

The building itself was the former home of the The Blue Coat School, the oldest and most substantial charity in Wolverhampton, it was established sometime between 1696 and 1700 for the poor of the town. Its small endowment was supplemented by legacies, subscriptions and donations from the well-to-do.

It moved into these new, purpose-built premises in North St. in May 1881. 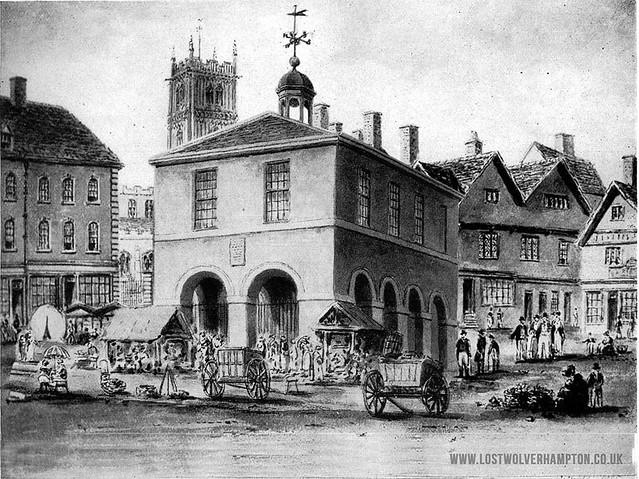 The  storytellers impression of the Market Place in 1750.

This Market Hall, situated in the Market Place (Queen Square) was an important feature in the town life of Wolverhampton. Probably   built during  the 16th century, and (like the one at Bridgnorth) constructed of “half-timber” supported on stone pillars, and so unlike that at Much Wenlock, which is built on wooden pillars, or others that are constructed entirely of stone. It measured from east to west 60ft. 6in., and from north to south 31ft. 6in., and so the room above was of a good size. Here justice was administered and any other public business transacted.

In 1777 an Act was passed “for Widening, Cleansing and Lighting the several Streets, Lanes, Alleys, Ways, and other public Passages, within the Town of Wolverhampton, in the County of Stafford, and for Taking down, Altering or Rebuilding certain Buildings therein mentioned,

The threatened buildings are mentioned in the Act, and the Market Hall was one of them. The upper part of this building (which is described as being a very ancient one) had been used for holding certain Courts by the Officers of the Lord of the Manor of the Deanery of Wolverhampton (a lessee of the Dean) and also as a Charity School (the Blue Coat School), which then was for 50 boys and 40 girls. This seems to have been the original schoolhouse of this foundation, the reason for which was probably due to its attachment to the Collegiate establishment, the owner of the building. 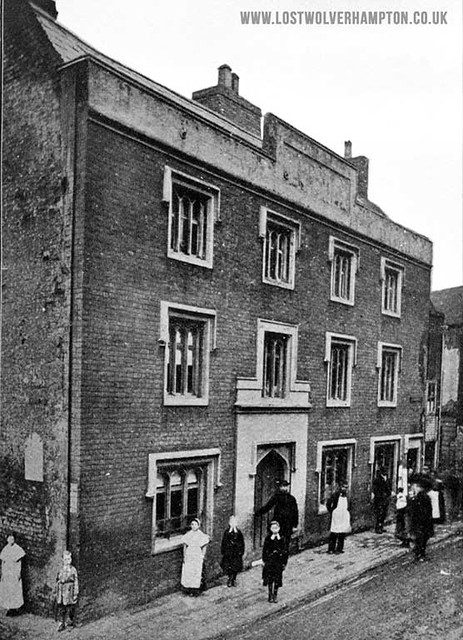 It later moved here into Little Berry St, at a cost of £6,000 including the site (the side  of the old General Post Office Building in Princess Street. today)

It was run by twenty-four trustees, it provided boarding facilities and a “sound, practical and religious education” for poor children.

In 1877, the School’s annual income, augmented by collections at St. Peter’s Church, was 400, and it was able to clothe about eighty children and board twenty in that year.

For a time in the mid-Victorian period, the School’s Honorary Secretary was Charles Mander, varnish manufacturer, and later In the twentieth century, the School became a day and boarding school for girls only.

The Blue Coat School closed around 1923, but its endowment continued to support Anglican schools in the town.

The North St. premises subsequently housed the Wolverhampton Borough Education Offices until around 1970, when they were demolished to make way for redevelopment. which included the extensions to the Telephone Exchange. The Education Offices by then had moved to St. John’s Square.