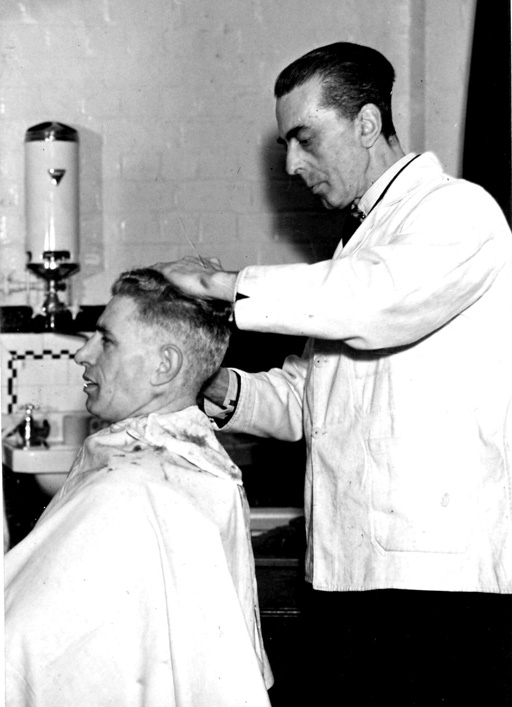 THE BARBERS!  A pre-war child’s definition..

A shop or front parlour, where a parent (usually father)  took a boy to be  almost  scalped, and to indulge  himself in a  masochistic act of being  singed across the back of the head with a flaming  taper.  This practice went on at least once every  month, without anyone being arrested for physical abuse.

In the 1940s unisex was unheard of; ladies went to hairdressers – men and boys went to barbers.

My very first experience of this early form of hair care was, as I remember, at a barber’s shop close to Leicester Square in Whitmore Reans. The proprietor, a man of small stature, was Mr Rudge. He plied his trade were he lived, in his terraced house with the front room converted as a barber shop.
My father would have his usual Robert Taylor special, short back and sides-parted in the middle, then brushed flat, finally singed at the back (that smell of burning hair, you never forget it) – and   plastered in  brilliantine.

As for myself; I would always get  (as every boy of my age did) well clipped up the sides and at the back, with a little tuft left on top, which would then be sprayed, from a bottle of scented water. I think they used this same spray at picture houses in between performances, as it smelled the same to me.

Well, that’s the way it was for us kids. No messing about with “How would you like it cutting?”.  None of that nonsense in those austere days, just after the war.

As for styling, the only hair style for Boys was the basin, named after the implement that was placed on the head, then all the hair showing below the rim trimmed off. The basin cut was usually  performed  by the head of the family on children whose parents couldn’t afford the 6d required for a barber shop haircut.

As for  young girls, they had one of two choices: the German helmet (girls version of the basin), or plaits, or pigtails.

In 1950, there were four barbers’ shops within easy reach of our house. Two in Stafford Street. Eason’s, on the corner of Wilson Street, opposite Speakes the builders, and Rutter’s next to the dark entry (which was opposite quick-fit and Faulkland car-park). Then there was Reed’s by the Chequer Ball, and McGovern’s on the corner of Vincent Street – both in North Street.

My first visit to a barber’s on my own was to Eason’s, and I didn’t enjoy the experience at all, as the barber cut the back of my head with the hand clippers.

I would  prefer my visits to Reeds; a more up market shop, which in fact was two businesses in one. Mrs Reed sold and repaired umbrellas in the front of the premises and her brother, with three or four male colleagues, cut hair in the saloon at the back.
This shop was very well run, with all the latest modern conveniences on offer – electric clippers, clean hot towels, and Brylcreem; but at the end of it, a kid still got short back and sides.

Ted McGovern established his barbers shop here on the corner of Vincent Street in the late 1940s in this former grocers’ shop. Ted became the most popular barber in the area for a short while, until this whole area around North Street was demolished for the extensions of the Molineux Grounds.

Then in the early 1950s (now in my teens, and cutting a bit of a dash in my gaberdine suit) I ventured into town, where hairdressers like Maisson Haselock in Lichfield Street were employing staff who were styling hair with taste, with titles such as the ‘Tony Curtis’ – or the D.A. – and for a brief moment in time this would become the norm.

Unfortunately for me, around the corner was National Service, and it was back to square one – SHORT BACK and SIDES!