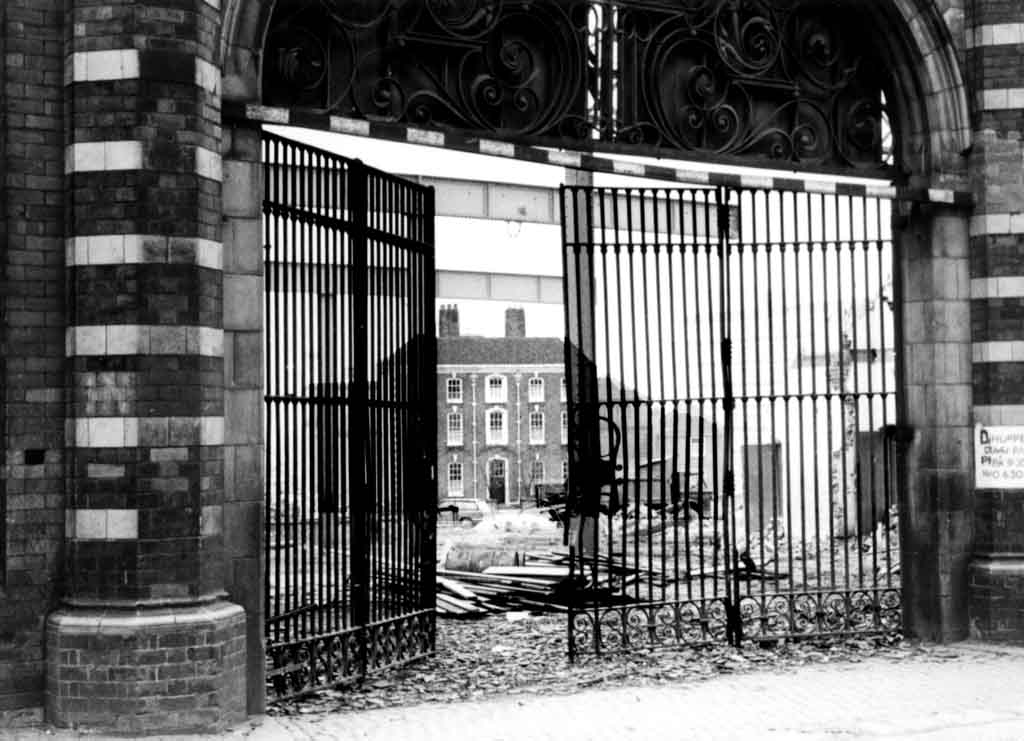 After leaving school in 1952 I found employment with H.Goodhall Ltd, in the Wholesale Market in Wolverhampton as a groundsman and porter. I would say the first three years working here in the market (before a break for National Service) were the best three years of my working life.

The hand bell that rang out daily at 3.00p.m. around St Peter’s Square, to herald the closure of a days trading has now been muffled for good.

And the many tradesmen and customers that had for many years gathered around at 6.00 a.m. outside these once majestic wrought iron gates of Wolverhamptons old fruit and vegetable wholesale market have long since departed after paying their last respects.

All that’s remaining is this brief unique view of the Catholic Church of St Peter and St Paul and Giffard House, framed by the last remaining arch, which adds an extra poignancy to a deeply moving scene at the end of the life of this Edwardian built masterpiece R.I.P.

The eye catching Wholesale Market, of which I recall with great affection, was erected in 1902, on a site now occupied by the Civic Centre, Wulfruna Street, in an area formerly known as Horse Fair.

Seventy years later in the early 1970’s the market building itself was still in quite good condition, but unfortunately its design and layout, didn’t meet with the demand for modern day distributing. Its existing facilities couldn’t cope with the quick handling, of the huge transports, and this caused terrible congestion, around Wulfruna Street during busy periods.

This, plus the lack of storage and garage space, for use by the merchants etc, added further handicaps to smooth organisation, and it was with much regret a new site had to be found away from St Peters Square.

For those of us who worked in the Wholesale Market during the first two months of 1963 there was no need for threats of being sent to Siberia, it was colder in here. It snowed heavily just after Christmas and then for weeks a glazed frost piled on the agony.

It was the worst freeze up since 1947, two things that always spring to mind was the tea freezing in cups when left a while unattended, and the price of the few vegetables produced leaping in price each day. The ground became so hard one local farmer Wallace Cartright from Wombourne resorted to using a pneumatic drill to dig parsnips!

This is a shot of the market interior in summer of 1963. The market appears very quiet now at the end of the day’s trading.

It mainly features the large trading area allotted to H. Goodall Ltd fruit & veg merchants. One of Goodhalls fleet of vehicles is seen fully laden, about to leave with goods for delivery to Newport Shropshire. The gentleman with arms folded was Tom Price, the General manager of H.Goodall; seen here chatting to Jack Thomas, a local greengrocer from Park Village.

A group of market veterans force a smile even though they are being uprooted from the ornate aisles of the Wulfruna street headquarters, where they have spent most of their working life.

They are from left to right: Sam Leason, George Henson, George Talbot, Horace Horton, Bert Weaver, Tom Adey, Steve Thomas, Edgar Finney, and Arthur Green. Looking back with hindsight perhaps, a tear or two would not have gone amiss.

In the local press on 22nd November 1973 it said… By Monday next the Edwardian shell of Wolverhampton wholesale market will be strangely quiet, because the trade will have moved two miles away to Hickman Avenue. The bustle and the banter of the fruit and veg trade, will now be echoing around new £500,000 premises at Monmore Green.